With the modality of the televised public hearing, the president of the National Assembly, Crispiano Adames Navarro, met with a group of businessmen and promoters from the private sector concerned about the appeal of Law 122 of 2019 and 314 of 2022, which dictate regulations of incentives to tourist activity, through Bill 844 presented by the Executive Branch.

Repeal that eliminates the incentives that have been granted to the tourism sector, suspending the fiscal effects, in response to citizen complaints and as part of the budgetary measures due to the national crisis situation in the country.

The Assembly, in its open door policy and as a sounding board, listened to the concerns and approaches of this important sector of the country.

The president of the Assembly pointed out that this form of citizen participation is for those who feel affected and with expectations, while insisting on the importance of legal certainty in a country that has been a melting pot of economic opportunities.

He indicated that this type of public hearing must be verified periodically with all sectors, including those that have an adverse position to those raised during today’s public hearing.

Deputy Melchor Herrera, Vice President of the Economy Commission, said that the arguments against the repeal of these incentive rules were heard at the request of the interested parties.

For his part, Sergi Lucas, Vice President of the Panamanian Chamber of Capital Markets, spoke about the consequences that the retroactive repeal of both laws would have, not only for the stock market but for the country.

For the businessman and promoter Alfredo Monagas, it is worrying that legal certainty and the investment already made are not being taken into account.

During the public hearing, Deputy Adames Navarro referred to the discussion as a bridge for all parties to present their contributions and arguments.

I have asked the entrepreneurs and promoters to present the technical documentation and runs that support their arguments.

He concluded by saying that after a comprehensive discussion, the National Assembly will make a decision with respect, tolerance and excellence. 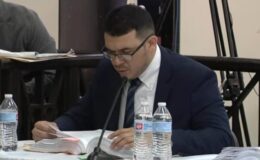