The reading of the tax hearing of the preliminary hearing of the Odebrecht case focused this Thursday on the analysis of crimes against public administration, donations to political campaigns and the use of the Panamanian financial system.

The third court liquidator of criminal cases of the First Judicial Circuit of Panama reported during the morning session that according to the Anti-Corruption Prosecutor’s Office, State entities such as the Ministry of Public Works (MOP), the Ministry of Economy and Finance (MEF ) and the Ministry of the Presidency were the most affected by the crime against the public administration, during the period 2009 to 2012.

The investigations showed that the duty guarantor ministers did not manage with the due priority, since they charged for the execution of acts of their functions in order to expedite procedures inherent to their positions for the benefit of the Odebrecht company, which paid them to through complex structures to disguise and conceal the origins of illicit payments.

“The public officials who are the object of this investigation benefited from funds from the Odebrecht black box, which they received from personal accounts or through other people for carrying out acts due to their position,” the Public Ministry (MP) mentioned.

In the case of the MOP, the officials were in charge of selecting the contractors, managing the works, such as the Cinta Costera 3, the renovation of the Historical Heritage, the renovation of Avenida Domingo Díaz, Vía Brasil section 1 and 2 and the highway in Colón, which according to the elements of conviction obtained from the Prosecutor’s Office, Odebrecht was aware of the terms of reference of the works, so it always had an advantage over the other bidders.

Within the MEF, who has the power to issue the state works, officials are also involved in the process of paying contractors.

While the Ministry of the Presidency were involved in the process of developing the project for Line 1 of the Panama Metro, an issue very close to the former President of the Republic, Ricardo Martinelli.

The accreditation and connection of those accused of the crime of money laundering, such as Óscar Salazar Chiappe, André Luis Paraná Ferreira, Pablo Roberto Costa, Pedro José Barusco, Renato Duque Sousa, Gilberto Macarena, John Santana and Mónica Moura Counha, were also analyzed . All of Brazilian nationality are identified by the MP as members of the corruption structure that devised Odebrecht and subsidiaries for money laundering and other crimes investigated and committed in Brazil as well as in the international sphere.

The reading of the tax hearing revealed that Oscar Salazar Chiappe and André Luis Paraná Ferreira, who were Odebrecht collaborators in Panama, were the ones who received the illicit money from Roberto Gutiérrez, a Rosas & Rosas firm collaborator. In this sense, André Luiz Campos Rabello, superintendent of the Brazilian subsidiary in Panama, established, within the investigation, that the law firm was used to receive illicit funds that were later delivered in cash to Oscar Salazar Chiappe and André Luis Paraná. Ferreira for payments of bribes from lower-ranking officials, such as inspectors, inspectors, among others.

According to information from the Division of Crimes Against the Public Administration of the Directorate of Judicial Investigation, an analysis was made of the documents that were provided by open sources and of judicial information sent by Brazil, the United States and Andorra, the financing of the campaign of José Domingo Arias, who ran as a presidential candidate from 2014 to 2019 with the Cambio Democrático (CD) party.

It is argued that said payments for the campaign were made by Odebrecht, using different structures, until reaching the accounts managed by John Santana and Mónica Moura Counha, both advertisers hired by the CD to improve the image of former President Martinelli and his government, as well as help promote the candidacy of Domingo Arias.

The publicist in her releases said that in 2013 she began to travel in Panama because she was negotiating a contract to work on the presidential campaign of candidate José Domingo Arias. She said that through Andres Campo Rabello, director of Odebrecht in Panama, she intermediated her meetings with former president Martinelli, who at that time could not be reelected, and therefore supported the candidacy of José Domingo Arias. These meetings resulted in the creation of the association Poliza America SA with which bank accounts were opened in Panama and which would receive funds from Odebrecht to finance Domingo Arias’ presidential career.

Moura indicated that in several of the meetings where Ricardo Martinelli participated, it was agreed that the amount contracted for the presidential campaign would be $21 million. Of that amount, the CD was responsible for paying the sum of $3,500 million that was included in three contracts signed between it and a deputy who represented the CD and the remaining $16,500 million would be paid by Odebrecht through several requests.

Andres Campo Rabello established, according to the tax reading, that former President Martinelli requested $10 million to spend on the campaign of Jose Domingo Arias and Odebrecht responded with a disbursement of $7.5 billion to advertisers, but the payment was suspended after the defeat. by Domingo Arias.

The Anti-Corruption Prosecutor’s Office pointed out that José Domingo Arias, 2014 presidential candidate for the CD, benefited from the illicit money that was received from the Polis America SA account, which was managed by John Santana and Mónica Moura Counha, who have already established the origin illegal that the final money was to cover expenses for the political campaign of Domingo Arias, who acknowledged that the money that entered Air Jul Consulting Inservice came from the Odebrecht subsidiary and that this account was opened to receive campaign donations.

With what was investigated and the link, the MP requested a summons to trial for José Domingo Arias and José Portas for the crime against the crime of the economic order under the money laundering modality since the budgets required in the Judicial Code have been fulfilled, since the evidence copied so far allows them to provide the structures and traceability that kept the money that benefited Domingo Arias. 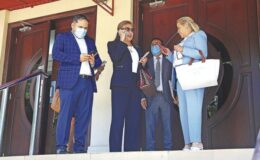 https://www-laestrella-com-pa.translate.goog/nacional/220913/jueza-marquinez-niega-incidencias-audiencia?_x_tr_sl=es&_x_tr_tl=en&_x_tr_hl=en&_x_tr_pto=sc The alternate preliminary hearing in the Odebrecht case began this Monday, September 12, with a list of incidents presented by the defendants’ lawyers, among which the prescription of the crime of corruption of officials was alleged and that exempted three former officials from being tried for this crime: Frank …