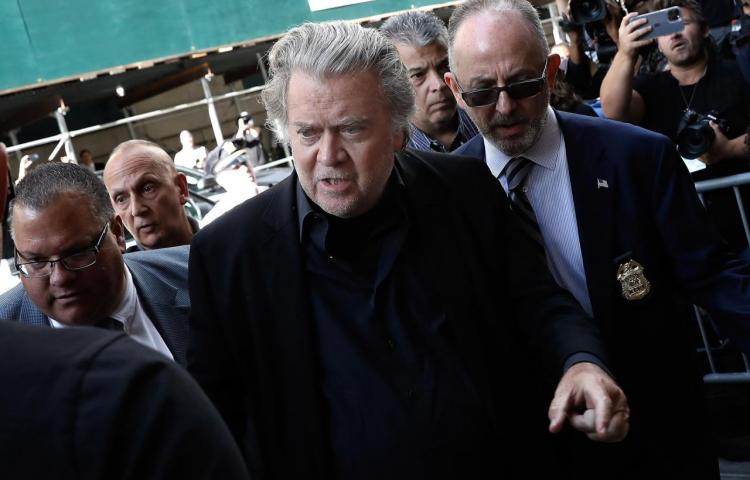 In February of last year, the New York Prosecutor’s Office began an investigation against the controversial former adviser for alleged fraud against donors for the border wall with Mexico.

The far-right and former adviser to former United States President Donald Trump, Stephen Bannon , was charged this Thursday by the New York District Attorney with crimes of money laundering, conspiracy and fraud for a fundraising operation to help build a wall along along the border between the United States and Mexico .

First thing in the morning, Bannon turned himself in Thursday to the Manhattan district attorney’s office .

The indictment, unsealed today, implicates Bannonon two felony counts of money laundering, two counts of conspiracy and one felony count of scheme to defraud in connection with his work on We Build The Wall , a fundraising operation to help fulfill the promise of Trump to build a wall on the southern border of the United States. Before walking into the Manhattan

district attorney’s office , Bannon described his situation as “an irony. ” at the border,” the 68-year-old noted to reporters. In February of last year, the

The New York prosecutor began an investigation against the controversial former adviser for alleged fraud against donors for the border wall with Mexico, after being pardoned by the former president hours before leaving the White House.

The “precautionary” pardon granted by Trump applies to possible federal crimes, but not state crimes, so Bannon could still be charged in this case.

Last July he was found guilty of contempt of Congress, for which he could be sentenced to up to a year in prison and a fine of up to 200 thousand dollars .

You may be interested in looking at our archives: Trump pardons his former far-right strategist Steven Bannon