FINALLY a Frog I want to talk about! “F” Red Frog, I am concerned about Golden Frog. 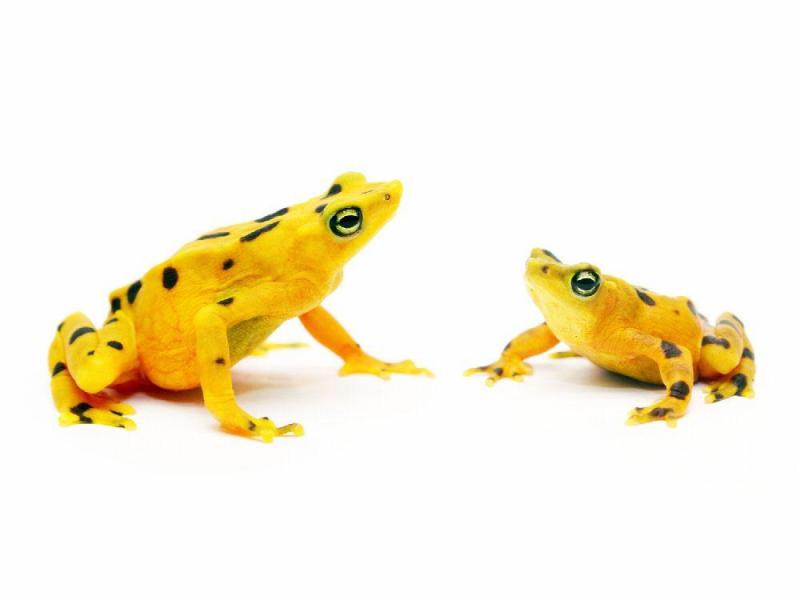 OP ED: by James “JB” Bryson– PNO has done entries about Spix Macaw, Sea Turtles, the Jaguar, and many other of the species that are vital to the Panama Eco-System. Probably none more precarious at the moment than the story printed below.

The Panama Amphibian Rescue and Conservation Project (Parc) and the Smithsonian Tropical Research Institute invite you to celebrate the festival of one of the most iconic national treasures of Panamanian fauna, the Atelopus zeteki, commonly called Golden frog from Panama, a representative species of biodiversity and the cultural history of the isthmus.

The Golden Frog Day is celebrated annually on August 14, in order to promote the conservation of these amphibians, currently extinct in the wild; The only place you can see it is in the expanded Smithsonian installation in Gamboa.

‘There are no records of sightings in the wild of golden frogs since 2009, although researchers have visited historical sites where they were commonly observed. Apparently this species has disappeared in nature, but it is recommended to continue monitoring these sites and visit other places within its known distribution range to be sure, ‘says Roberto Ibáñez, national director of the Parc.

Although the latest advances in their protection suggest that through captive reproduction and the creation of stable populations, the risk of extinction is minimized, “we are not yet ready to put them in their natural state,” says Linette Dutari of the Smithsonian .

‘There are no exact figures, they have been reproduced in captivity for several years and they seek to continue doing so in a continuous, stable and safe way for the health of these amphibians. The amount in which they can be multiplied depends on how many eggs the animal lays, it is something more natural than scientific, ‘says Dutari.

Loss of their habitats, environmental pollution, climate change, coupled with the severe threat of the chytrid fungus, have a low risk of more than 30% of five species of Atelopus, including the golden frog.

‘Right now, the main enemy is the amphibious chytrid fungus. Frogs of the genus Atelopus, including the golden frog, are very susceptible to this fungus that makes them sick and causes their death. There are other natural enemies of these frogs, such as a species of snake that can feed on poisonous frogs, ‘adds Ibáñez.

According to an article published in the journal Biological Conservation, in which Smithsonian scientists Roberto Ibáñez and Brian Gratwicke participated, research conducted in Panama helps improve the life expectancy of these species.

Studies conducted on sick frogs brought from nature allowed to improve the protocols for the detection and treatment of the disease. Also, it was discovered that frogs tolerate infection better in hot and dry conditions than in temperate climates.

The Parc states that one of its main objectives is the eventual reintroduction of threatened species into their natural habitat and the restoration of wild populations in the country. With that in mind, scientists have created maps that identify the most appropriate regions for frog survival.

To study the transition from captive Atelopus to nature, trial releases have been made with surplus frogs.These have allowed researchers to experiment with different methods of reintroduction and post-release monitoring.

‘Two trials have been done with the golden frog. In 2017 and 2018. Transmitters were placed to see how it behaves in its habitat. It is still necessary, we are not yet ready to put them in their natural state. The mission of scientists is first to overcome the chytrid fungus and then return them to their habitat. When will it happen? We don’t know, they are natural processes, ‘says Dutari.

Although scientists recognize that it is difficult to do, monitoring after the release of frogs allows them to know what other threats they face in nature, at what stage of development it is more convenient to release them for survival, or if they manage to recover natural toxicity They lose in captivity.’TWO TRIALS HAVE BEEN DONE WITH THE GOLDEN FROG.TRANSMITTERS WERE PLACED TO SEE HOW IT BEHAVES IN ITS HABITAT. IT IS STILL NECESSARY, WE ARE NOT YET READY TO PUT THEM IN THEIR NATURAL STATE. THE MISSION OF SCIENTISTS IS FIRST TO OVERCOME THE CHYTRID FUNGUS AND THEN RETURN THEM TO THEIR HABITAT ‘

At the end of May, the Parc published that a recent and promising discovery, by some scientists from the Smithsonian and other institutions, showed that some amphibian populations have developed skin secretions that resist the chytrid fungus. Frogs with this evolutionary trait could be introduced into habitats where the fungus exists.

Another possible approach would be to breed fungus-resistant frogs, increasing antifungal secretions in your skin, but more research is required to progress in this direction.

Finally, in the laboratory progress is being made on the cryopreservation of tissues and sperm of the Panamanian Atelopus, a preservation process at very low temperatures for future use, which would eventually allow assisted reproduction to be incorporated into strategies to save frogs. from Panama.

In order to raise awareness about the frog rescue efforts in Panama, the Smithsonian Tropical Research Institute conducts the Golden Frog Festival, where various activities are carried out for educational and recreational purposes for the whole family.

Until August 31, institutions and groups such as the Panama Amphibian Rescue and Conservation Project, among others, will have spaces for talks, exhibitions and other interactive activities, which will take place mainly in Panama City.

The activities began with visits to the frog exhibition, the butterfly garden and the night of the bats, on Sunday, August 4.

On Wednesday, August 14, from 11:00 am to 3:00 pm, the Busito de la Ciencia will take a tour in several schools in El Valle de Antón, to bring scientific information to the students with the support of the group ‘Golden Frogs to Rescue’.

From August 27 to 31, the whole family can enjoy an activity at the Punta Culebra Natural Center, in the Amador Causeway, where there will be educational games, art for children and the exhibition the Fabulous Frogs of Panama, among other attractions.

On Wednesday, August 28, the Smithsonian Tropical Research Institute will make a presentation on the importance of amphibian conservation, from 6:00 pm to 8:00 pm, at La Rana Dorada, located in Vía Argentina.

The talk will feature the participation of specialized scientists who will explain their research work to protect these amphibians in the national territory.

For the conservation of an icon of Panamanian fauna

In May 2019, the Panama Amphibian Rescue and Conservation Center closed its facilities at the El Níspero Zoo in order to consolidate its captive breeding operations in one place in Panama. The living animal collection now resides in the expanded facility of the Smithsonian Tropical Research Institute in Gamboa.Topic connoisseurs point out that the adult male of the golden frog has measures of 35 to 40 millimeters, with a weight of 3 to 5 grams. The female ranges between 45 and 55 millimeters and four to seven grams in weight. They communicate through body language. According to studies, they socialize with other frogs using guttural sounds and hand movements.