Church chimes in for it’s opinion on Martinelli case 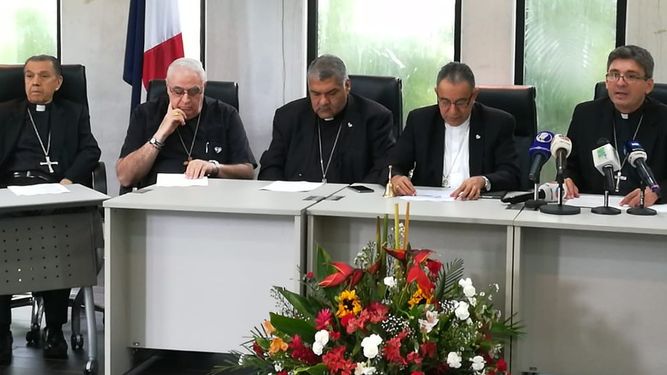 Cardinal José Luis Lacunza warned that the process followed by former President Ricardo Martinelli “is an emblematic case for the justice of the country and it is necessary for justice to put on the trousers of legal age, to face something that may be decisive for the future of Justice”.

Magistrates, without consensus in amparo in favor of Ricardo Martinelli
ANALYSIS A protection that can be a key to impunity
Jerónimo Mejía denies 7 nullity remedies to Martinelli in the process of listening
‘To flee and, after being extradited, to try to annul the process, is a nonsense’: Jerónimo Mejía
Lacunza made these accusations at the conclusion of the Second Ordinary Plenary Assembly of the Panamanian Episcopal Conference , which was held from July 2 to 6.

“I hope that the Supreme Court of Justice when I have to vote, I understand that next Monday that decision, do so with full awareness and responsibility.” Not to remove a hot potato from your hands and throw the gold to another shoulder. he has to play his role and play it thinking of the good of the entire Panamanian community

The plenary session of the Supreme Court of Justice did not reach consensus in its session on Thursday, July 5, in which an amparo of constitutional guarantees presented by Martinelli’s defense against the decision of the magistrate judge of guarantees, Jerónimo Mejía , was discussed. maintain the competence of the puncture process .

It is necessary that those who exercise justice fairly punish those who transgress the law, applying penalties proportional to the crime committed and their specific circumstances, avoiding impunity, corruption, authoritarianism, discretion and revenge, “said the Episcopal Conference in a community spread this Friday.