Stay informed on what we are losing. 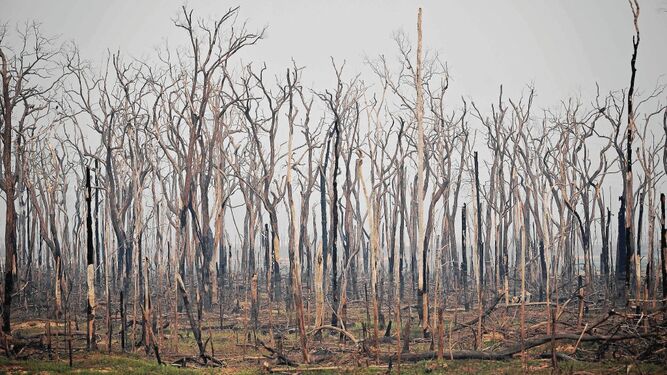 The negative news for the environment not only comes from the burning Amazon. The total number of animals and plants at risk of extinction increased from 26 thousand 197 in 2018 to 28 thousand 338 in 2019, according to the recent update of the Red List of Endangered Species of the International Union for the Conservation of Nature (IUCN).

Image of the fire in Candeias do Jamari, Brazil. AFP

In the line of extinct species, 73 are in their natural habitat, such as the golden frog of Panama, and 873 have disappeared entirely, according to the list published a few days ago.

The group of missing animals will be joined “within a few months” by the vaquita marina, according to environmental organizations in Mexico, who estimated the cetacean population to be “a dozen specimens” in their habitat in the Gulf of California.

Amphibian populations (40%) are the most affected, followed by conifers (34%) and corals (33%), among other species ( See infographic ).

“The Red List of Endangered Species , as a world inventory, allows us to alert you to the state of the world’s biodiversity and its applications allow decision makers to consider the best options for the conservation of species (…) The information on list indicates that the source of our food, medicines and drinking water, in addition to the livelihoods of millions of people, could be at risk with the rapid decline of animal and plant species in the world, ”explains IUCN in its portal internet www.iucn.org.

In Panama there are 2,307 species between fauna and flora that face some situation of risk of extinction, according to the List of threatened species of flora and fauna of Panama (2016) prepared by the Ministry of Environment.

The Amazon rainforest, prey today of multiple fires, plays a crucial role in the stability of regional and global climates, and its destruction, although partial, would have consequences for the planet’s temperature and biodiversity.

The jungles of the world – and in particular those of the tropics – absorb between 25% and 30% of the carbon dioxide (CO2) that humanity releases into the atmosphere. Without these CO2 “vacuum cleaners”, the temperature on the Earth’s surface would be much higher and the risk of rapid global warming, higher.

James- I have read you silently for months, and you are nothing if not passionate and committed. I think you get riled up a bit for a retired man, but you did say you were military and from Chicago, so me being from Barcelona I should keep an open mind.

Your comments on the environment are appreciated greatly by my partner and I who feel exactly the same about the issues you bring up on the planet. Keep it up for all of us and especially for Panama.