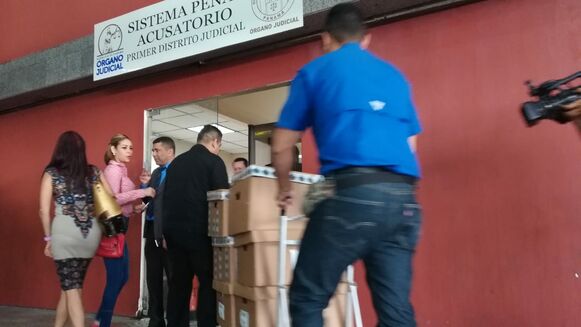 The oral trial that is followed by former President Ricardo Martinelli , for the alleged commission of crimes against the inviolability of secrecy and the right to privacy, and embezzlement, resumed on the morning of this Tuesday, April 16.

MP: Trial court violates due process
The diligence of this process is retaken after the past April 11, Judge Roberto Tejeira decreed a recess, for the prosecution to take copies of the seven booklets containing confidential material intercepted the victims and delivered them to the defense de Martinelli, currently under provisional detention in El Renacer. The seven booklets contain a total of 3 thousand 245 pages.

Before the oral trial began, Prosecutor Gonzalez said that “we are going to request that we be allowed to contrast the documentary support with the digital support, we will see what the court establishes”.

And, according to the prosecutor, “there is no longer any reason to deny this contrast or this comparison of one support with the other”.

The trial of the former president resumed on Tuesday in Plaza Ágora, where the accusatory criminal system operates. Richard Bonilla
Martinelli’s trial also resumed a day after the Public Ministry interposed – before the First Superior Court – an appeal for constitutional guarantees against the trial court that prosecutes former President Martinelli.

The prosecutor Gonzalez reiterated that, after making due considerations, the action was filed after the court refused to open evidence of the case.

“If these evidences have already been presented, they are part of the material element, they are valid proofs, the most logical thing is that the exhibition be allowed,” he remarked.

The prosecutor added that the amparo will be submitted to distribution on Wednesday, April 17.

In this regard, lawyer Carlos Carrillo, of Martinelli’s legal team, said that the prosecution has all the right to act “if it considers that it should do so” and added that “the defense has the same right”.

“Unfortunately, what was criticized yesterday by the defense is done by the Public Ministry itself,” said Carrillo.