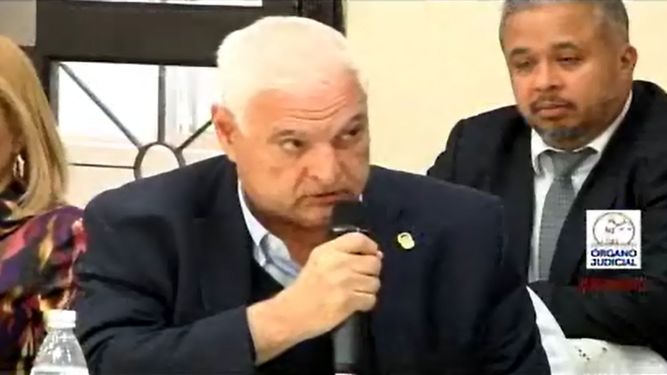 The defense of Ricardo Martinelli requested a bail of release “of between $ 250 thousand to $ 500 thousand” in favor of the former president, alleging his medical condition and that there is no risk of flight or destruction of evidence.

Attorneys Martinelli present two other appeals in the Court
Prosecutor requests condemnation for Pérez and Garuz, former secretaries of the CSN
Dimas Guevara, lawyer of Martinelli, sustained the petition this Monday, September 10, in a hearing before the plenary of the Supreme Court of Justice (CSJ), constituted in collegiate court, within the process that is followed by the unauthorized interception of communications from the National Security Council, in the last two years of his mandate.

Guevara said that Martinelli was “tortured and harassed the year he was imprisoned” at the Federal Detention Center in Miami , waiting to be extradited to Panama. “He even thought about taking his own life,” said the lawyer, and provided an examination of the psychiatrist Frank Guelfi , who would back these accusations.

According to Guevara, his client suffers from hypertensive ischemic heart disease, depression, hypertension and tachycardia, and that “more than 12 times” he had to be treated by the 911 emergency service, either in El Renacer -where he has been since 11 last June- or the Santo Tomás hospital.

The lawyer asks that Martinelli be sent to his residence, in the custody of agents of the Institutional Protection Service (SPI), a government agency that already grants protection to the former president of the Republic. He further argues that “Martinelli has not been proven or linked” with the crimes of embezzlement and inviolability of secrecy and the right to privacy, to the detriment of at least 150 people.

Guevara insists that there is no risk of destroying evidence and that his client has “no intention of fleeing or has attempted to flee”.

“When he left this country, he did not have a pending process,” insisted Guevara. He also said that the former president “neither intends nor has attempted to attempt against any of the victims and has no interest in undermining any of them.”