Diaz implies of threats due to Martinelli prosecution. 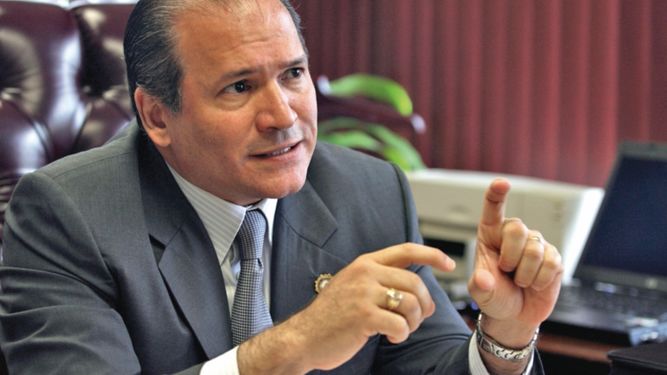 The magistrate of the Supreme Court of Justice (CSJ) Harry Diaz , ex-prosecutor of the trial of Ricardo Martinelli for alleged political espionage, responded on Wednesday, June 19, to accusations that circulated in social networks that allegedly link him to the collection of a bribe of $ 13 million.

“It’s totally false,” he said in an interview on the Open Debate program. He assured that Martinelli and his team of lawyers attack him “because I did my job” in the process that the Supreme Court of Justice took. Díaz prepared the fiscal hearing on October 9, 2015 in which Martinelli is accused of the alleged commission of four crimes – against the inviolability of secrecy and the right to privacy, and two forms of embezzlement – and requests the maximum penalty of 21 years of prison. The case was subsequently referred to the ordinary courts last December, as the defendant resigned as deputy of the Central American Parliament ( Parlacen ).

He explained that he “never” made a pact with President Juan Carlos Varela to prevent his brother Javier Díaz , former Minister of Health, from responding to the courts for having received a bribe, as the ex-petitionary’s relatives point out.

“I have never reached a pact with Varela of absolutely nothing,” said Díaz to journalist Atenógenes Rodríguez , to whom Martinelli wrote a note on June 9, 2018, when he was detained in Miami, in which he assures that the then fiscal magistrate asked for a “coima” of $ 13 million. The handwritten note was shown in Open Debate .

Image that circulates in social networks, to which the magistrate Harry Diaz alludes in Open Debate.
It reproached that close friends to Martinelli have systematically attacked him and have dedicated themselves to defame the magistrate Jerónimo Mejía -other judge of guarantees of the case-; Attorney Kenia Porcell; and Secretary of the National Security Council, Rolando Lopez.

“The criminals are not us,” said the magistrate.

“It is very easy for this person [Martinelli] to say that everything is a political persecution … He does not want to admit that he committed a crime,” he said.

Letter written by Ricardo Martinelli to Atenógenes Rodríguez.
He said that Varela did not give him instructions on how to direct the process to Martinelli.

“That conspiracy theory is very easy for this person to say that all the people who are processing or warning him, is because they are pursuing him politically. Totally false, “he said.

According to Díaz, “Martinelli does not want to admit that he committed a crime, the whole country knows it, even his lawyers, although his role is to defend him.” He added that he knows that he “punctured” at least one person, because on one occasion Martinelli, in the Presidency of the Republic, confided to him that he was spying “on a girl he was walking with … It never occurred to me at that moment that this person was the only one, that half humanity in the country was punctured”.

In the fiscal hearing there is a list of 49 recognized victims, who were spied by the National Security Council, between the years 2012 and 2014.

He also said that “a couple of weeks after filing the accusation” – which was on October 9, 2015 – he received in his office Sidney Sitton , Martinelli’s lawyer, and that he denied the responsibility of his client in the case of punctures and in other proceedings advanced by the Court, by virtue of which Martinelli then had the status of deputy of Parlacen . On the Impregilo case, Sittón blamed the former Public Security Minister José Raúl Mulino ; in the process for the purchase of dehydrated food, he attributed the responsibility to the former Minister of the Presidency, Jimmy Papadimitri, and in the Riego de Tonosí, to the former Vice President of the Republic, Felipe Virzi.

He also attended in his office other members of the defense team, such as Carlos Carrillo and Alma Cortés .

“I told Sittón and I repeated it to Alma and Carrillo: ‘I know he punched in. Admit, compensate the victims and the State, and spend some time in jail,’ he said.

“To Carrillo, who had better esteem, he spends saying that there was procrastination, because I went to a Baltic cruise, but they forget to mention the more than 50 resources that they presented and that they continue to present so as not to face justice as God commands, “adding that these lawyers arrived” every week “with the announcement that the defendant had a” different disease. “

Sitton, by the way, contacted him to travel to Miami – where Martinelli spent a year detained waiting to be extradited – for an alleged “terminal” illness of the former president. Next, Sittón met with him and the group of plaintiffs in the offices of lawyer Francisco “Paco” Carreira . Mitchell Doens , victim and plaintiff, said in that meeting that they accepted a meeting with Martinelli in Miami “for humanitarian reasons.” Carreira was entrusted to represent the group, but Martinelli was never authorized to receive such a visit at the Federal Detention Center in Miami. As Diaz did not want to meet Martinelli alone, the meeting was never held. “After that, it was that he came out saying that I had asked for bribes.”

As proof of this situation, he says to have all the chats exchanged with Sitton.

Early on the morning of June 12, Martinelli received a change of injunction by order of the trial court. Now it is under the domiciliary deposit regime. Ana Rentería
About Rodrigo Sarasqueta , ex-adviser of the Presidency in the last government, said that he expelled him from his office, because in an appointment he asked him to call a judge from Penonomé to dictate a ruling in his favor in a lawsuit over some lands. The incident was reported by telephone to then President Martinelli, who cared little about Sarasqueta’s behavior. “He [Sarasqueta] is in his pods, and I have him to do my dirty jobs,” said Diaz, who was Martinelli’s answer. My answer was: tie that dog . “

He also responded by the criticism received that the case was not declared a complex cause and that, therefore, the provisional detention of Martinelli, who now has a home deposit, could not be prolonged for more than a year. He warned that the prosecutor can request the declaration of a complex cause at any stage.

“The Criminal Chamber in repeated cases has indicated that this term of one year is not automatic for freedom, we must see case by case … The judges are cleaning up with the prosecutor, who at that time was me, and not knowing the failures, “said the magistrate.

“If those judges can not understand that we are dealing with a complex cause per se , then they are wrong.”

He questioned that Martinelli, instead of keeping “a low profile” in his residence in Altos del Golf, is dedicated to slander, celebrate and sing, ” disguised as a charro tapatio, as if nothing happened, all diseases were eliminated.”

Díaz is overdue for his ten-year term as magistrate in December and recalled that once he ceases to be an official, he will be free to file claims for libel and slander and for compensation.

“For an honest person, reputation is everything … Anyone who confronts Martinelli, they begin to threaten that they will sue, it is an attitude that still has not been taken away from him.”