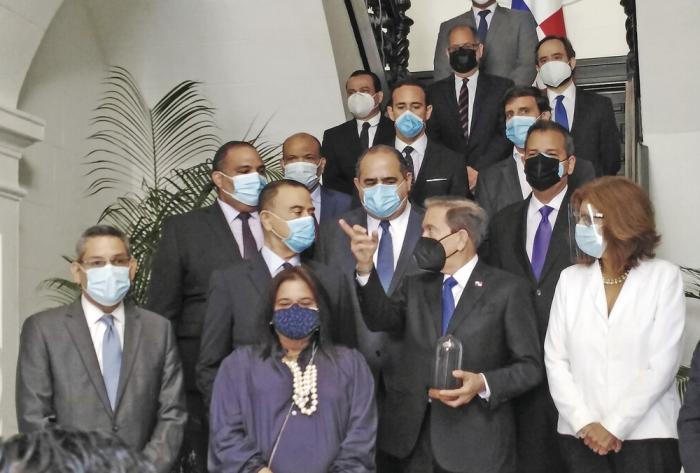 Nito want’s freedom of the press and “free expression”. Then let PNO freely express that his CABINET is LOADED with people on the TAKE. See VP and Minister. Nito claimed they would be expelled if proven. Look closer Nito, get eyes checked. Hope they all had a nice weekend……….#worstsecretinpanama.

Panama’s report to the IAPA reflects an increase in legal actions against journalists and the media as a mechanism of self-censorship. Cortizo ratified his commitment to freedom of expression, signed the Declaration of Chapultepec and that of Salta

In Panama, an increase in legal actions against the media, journalists and opinion generators or influencers was observed, as an intimidation mechanism to promote self-censorship, details the report of Panama before the Inter-American Press Association, which celebrates the 76th assembly of the October 21-23.

That is the conclusion reached by the report on Panama with respect to the exercise of journalism and respect for freedom of expression and information.

During the opening session, President Laurentino Cortizo, main speaker of said assembly, ratified his commitment to freedom of expression by signing the Declaration of Chapultepec, and became the first president to sign the Declaration of Salta of 2018, on principles of freedom. of expression in the digital age. The president’s signature of both documents was done with pencils that incorporated the DNA of three murdered journalists, as part of the launch of the campaign ‘Immortal Pencils of the IAPA’, which seeks to create greater awareness about the impunity surrounding crimes against journalists.

The report on Panama lists a series of acts against freedom of expression and the exercise of journalists, in addition to the operation of the media. Among them, he summarizes the numerous civil lawsuits, which intimidate journalists, and threaten the functionality of the media. On the judicial issue, it describes the actions that have affected journalistic work and the omission of the Supreme Court of Justice in matters of transparency, by denying a Habeas data with which it was intended to know the use of public funds.

Another point highlighted by the report issued by Eduardo Quirós, regional vice president of the IAPA, refers to the intention of deputy Javier Sucre, who through a bill intended to sanction those who “record videos, take photos of calamities, accidents, fights or any incident, affecting third parties and published on social networks ”. Bill that was rejected by the National Council of Journalism and the Forum of Journalists.

In another fact, it highlights that former president Ricardo Martinelli has filed 38 lawsuits against journalists and media directors with claims for more than $ 46 million.

Add the performance of Judge Lina Castro, of the Fifteenth Circuit Civil Court, who ordered a kidnapping of bank accounts and assets of the newspaper La Prensa for an amount of $ 113 million as a result of a lawsuit by former President Ernesto Pérez Balladares, for alleged damages and damage to your reputation and honor.

On the judicial issue, it also describes the prohibition of the Guarantee Judge Elkis Martínez, from photographing the lawyer Jaime Lescure. The lawyer sued La Prensa for publishing audios in which the lawyer offered services to a client that included paying bribes to judges and magistrates.

Eleven organizations asked the Special Rapporteur for Freedom of Expression of the Inter-American Commission on Human Rights (IACHR) to pronounce on the actions of judicial harassment against the aforementioned newspaper.

In October, the digital platform Foco asked the IACHR for protection measures for “telephone threats, cyberbullying, complaints and criminal complaints.”

Quirós recalled that in Panama the penalty for libel and slander is still maintained through the media. Although in the past it was discriminated against in cases of officials with national jurisdiction, it continues to apply to other officials, former officials, and individuals.

The Code punishes these crimes with penalties of 6 to 18 months in prison or its equivalent in fine days. In civil matters, the report highlighted the concern over the large claims, processes that intimidate journalists and compromise the operation of the media.

In terms of transparency, it gives an account of the action of the Supreme Court of Justice that did not admit a Habeas data action on the use of public funds during the pandemic. A decision that worried journalistic entities due to the lack of compliance with the Transparency Law and the operation of the National Authority for Transparency and Access to Information.

Finally, it refers to the pandemic and the serious consequences it has caused for the sustainability of the media, which have been forced to make important adjustments to survive.