Guaido promotes stoppages to demonstrate for liberation from Maduro. 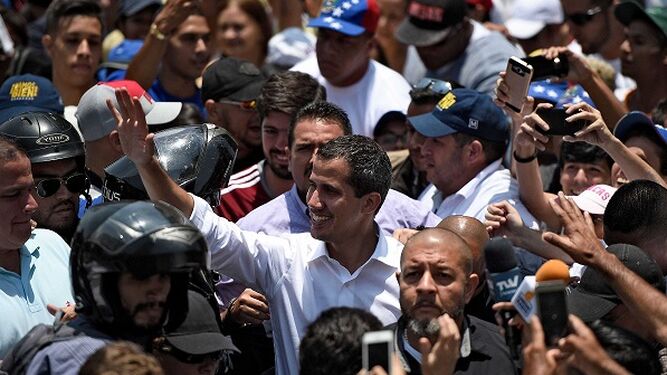 From Thursday, May 2, a series of staggered strikes will begin in Venezuela until a general strike with the intention of achieving the liberation of the country.

US military intervention in Venezuela is ‘possible, if necessary’: Mike Pompeo
Juan Guaidó tries to redouble pressure against Nicolás Maduro
This was stated by the president in charge of Venezuela, Juan Guaidó , at a rally in the El Márquez sector. The leader reappeared after his attempt to expel Nicolás Maduro from the country.

Guaidó accepted that he was in talks with a group of soldiers, who backed them in an attempt to take control of the Miraflores Palace, the seat of the Venezuelan government.

From the early morning of this April 30, Guaidó, a group of soldiers loyal to him and the leader of Voluntad Popular, Leopoldo López, called all Venezuelans to the streets. First they did it from the La Carlota base and then at several points in Caracas.

After this call there were protests in the 24 states of Venezuela, which left at least one dead, an undetermined number of wounded and more than 150 detainees.

The declarations of the president, backed by 54 countries, occurred during a rally for Labor Day.

The first group of workers that will start staggered stoppages is that of public sector administrators.

Guaidó reminded his followers that he has the support of the military, the Catholic Church, public employees and all the people of Venezuela. In addition to the world.

The political leader boasted that the Maduro regime was not expecting the April 30 protests or the support of a group of soldiers from the base of La Carlota and less the release of Lopez, who was under house arrest.

Lopez yesterday joined with his wife and daughter as a guest at the Embassy of Chile in Caracas, however, a few hours later he moved to the diplomatic delegation of Spain.

López, her sisters and their parents have Spanish nationality.

In different Venezuelan states this Wednesday there were protests and marches against the Maduro regime. Opponents complained about the blocking of the internet and cellular services.

Guaidó promised that he will continue to release political prisoners as he did with López.

The assistants to the concentration in El Márquez asked him what was happening with Leopoldo López, who only toured the city of Caracas next to Guaidó until the afternoon of this Tuesday. But he did not give details of the whereabouts of one of the founders of the Voluntad Popular party.

He said that he is fighting for the rights of Venezuelans and that the world supports him to achieve the happiness of his people again.

At the same time he told his followers that they are heading for a general strike. “You can or can not, let’s go forward Venezuela.”