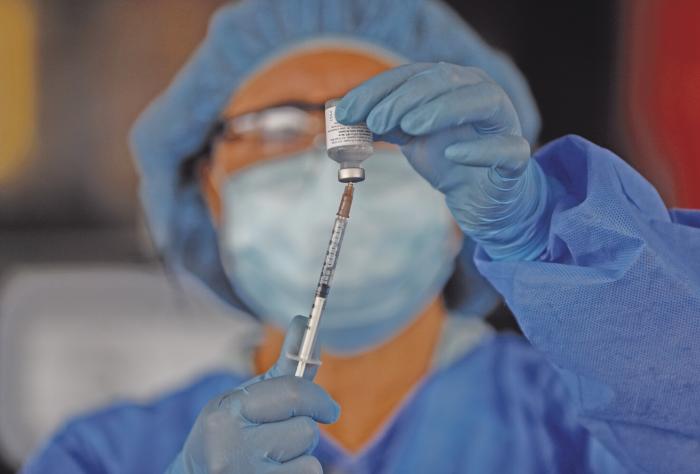 The first doses are expected to arrive before March 2021, the rest would be between March and June. It is required to apply the vaccine to 70% of the population in order to contain the new coronavirus in the country.

While the World Health Organization (WHO) asks to intensify the production of vaccines against covid-19, the doctor and member of the Covid-19 Vaccine Consortium, Eduardo Ortega, announced on Tuesday that Panama plans to receive the first boarding before March 2021.

He reported that in total Panama plans to purchase about 5.5 million doses of vaccines against covid-19, but that they will arrive “little by little”, so the other shipments of doses are expected to bring between the months of March and June.

“We expect the first doses of the vaccine to arrive in the first quarter of next year, that means before March. Other doses will arrive between March and June, and later after June, ”said Ortega on National Television.

He mentioned that Panama currently has agreements with three companies: Pzifer, Johnson & Johnson and AstraZeneca to acquire the vaccine as part of a bilateral negotiation; and it also has another multilateral with Covax, for a fourth vaccine that is still unknown.

He highlighted that of these, the Pfizer vaccine has already been submitted to the FDA for approval with the US regulatory authorities, and the AstraZeneca vaccine will probably be submitted to the European authorities in one or two weeks, so it is expected that some will be already approved for the beginning or middle of December, so that it can arrive in the country at the beginning of next year.

He stressed that the $ 5.5 million doses of vaccines that it has been agreed to bring to the country would cover more than 65% of the population; and if it is calculated that children and pregnant women are still not going to be vaccinated, which is about one million people, it can be said that “today Panama is considering vaccinating almost all those who could be vaccinated to stop this pandemic.

He explained that there are two doses that must be applied, because “it is useless (bringing so many doses) if we don’t put them on people’s arms. That means distributing them, applying them to achieve high coverage ”.

He specified that it is necessary for “more than 70% of Panamanians to be vaccinated to stop this pandemic, avoid hospitalizations and deaths, open the economy and for our country to return to post-pandemic reality.” “We all need to collaborate, it is solidarity,” he added.

Along these lines, he exhorted the population to have “confidence” in these vaccines because “they are not going to be tested if they are not safe”; and today there are groups of world experts in the United States and Europe evaluating the data. “The WHO is evaluating the information and when we have the safety seal, we have confidence that the vaccine is safe and highly effective,” he said.

He reiterated that the first people to be vaccinated are the personnel who work in health centers, hospitals, health centers, polyclinics, nurses, assistants, medical technologists.

People who are around sick people, staff working in hospitals who are not directly exposed to patients, individuals over 60 years old, people with chronic diseases, such as morbid obesity, hypertension, diabetes, problems will also be vaccinated. lung, immunosuppression problems such as cancer.

Although personnel working in security areas, national police, firefighters, emergency response ambulances are also being considered, they are considered in priority groups.

In addition, people who have suffered from covid-19 can also apply the dose. “If you recovered from covid-19, you had a moderately severe illness or an asymptomatic infection, the most probable thing is that the vaccine reinforces that immune response that you had and that helped you to get out of that infection or that illness. So the most advisable thing is that regardless of whether you have been infected or not, you get both doses of the vaccine, “he said.

Ortega explained that the three vaccines are of two doses, with an interval of application of three or four weeks. There is also a single-dose vaccine, which is very interesting because it allows you to go to the most remote parts of the country and not have to return to place the second dose of the vaccine.

On allergic people, and how the dose will be treated in these groups of people, he said that as these vaccines are totally new “no allergic reactions have been observed, but it is possible that they are given” by some of the components of the vaccine .

Furthermore, “as these vaccines are not like the usual ones that are grown in laboratories where they have culture media, antibiotics and different components, we cannot predict whether or not someone will have an allergic reaction to the components, but it has not been reported in the studies we have analyzed ”, he stated.

Ortega said that today they have efficacy data from phase three of three of the vaccines. The range of efficacy varies, the Pfizer vaccine has 95%, the modern vaccine has 94.5% and the other has an average 70% effectiveness, however, that 70% is still being discussed because its effectiveness result is did based on a combination of two studies, one of which was 90% effective.

Regarding the fears about the side effects that the vaccine could have, he said that of the data they have from phase three, which are the closest and those that have recruited the largest number of subjects, in one study they have 43 thousand, in the other 30 thousand and in the other 11 thousand. In combination with these studies, more than 80 thousand people have been recruited.

He indicated that most of the side effects of the vaccines if they are going to occur occur in the first six or eight weeks after vaccination and in these studies the follow-up has been more than two months, after the second dose, in most of these subjects.

And what has been observed, the most common, are local symptoms. Less than 5% of vaccinated people have reported a headache, discomfort, muscle pain, joint pain and some tiredness or fatigue. “These are the symptoms that have been observed between 2% and 5% of people and that in these studies it is said that they have been grade three,” he said.

The National Government of Panama has already announced that it will allocate $ 48 million for the acquisition of the vaccine against covid-19.