After puppet Roux has lost, Varela working hastily to secure his appointments. 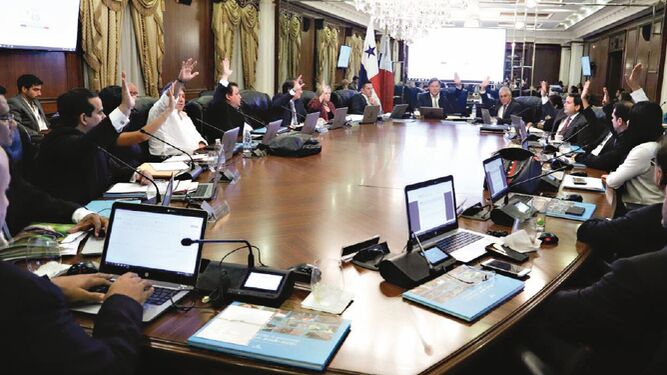 OP ED:  This is not independent of Varela and Panama. It is a right of passage back in the US for exiting Presidents to push all their agendas through up to and including the Presidential pardons of friends and white collar criminals. Just always something I have hated.

President Juan Carlos Varela called the National Assembly to extraordinary sessions from the 27th of this month until June 30, the last day of his term.

Saint Malo declines appointment to ACP board
Emanuel González Revilla asks not to be considered for the board of the ACP
The agenda includes 12 points, including 8 high-profile designations.

Among the appointments are a chief magistrate of the Supreme Court of Justice – Luis Fernando Tapia González – and three substitutes – Luis Antonio Camargo Vergara , Katia del Carmen Di Bello Becerra and Judith Esther Cossú Admadé -. Those of Camargo, Di Bello and Cossú are pending since December 2017, when the Executive called the Assembly to ratify Ana Lucrecia Tovar and Zuleyka Moore as principal magistrates. The one of Tapia is pending since last March.

He also put to the consideration of the deputies the appointment of María Eugenia Pérez de Preciado as electoral attorney general, appointed on March 12 to replace Eduardo Peñaloza , who ended his term in December 2018.

Hours after the ambassador of Panama in Washington, Emanuel González-Revilla , joined the vice president and chancellor Isabel de Saint Malo de Alvarado in the decline of his appointment to the board of directors of the Panama Canal Authority (ACP) – for the sake of “seeking consensus” – yesterday afternoon the Presidency of the Republic announced that the engineers Roberto Roy and Marietta Jaén had been approved by the Cabinet Council to occupy these positions.

The new appointments of the Executive were included in the agenda of topics for the extraordinary sessions, which were convened yesterday by the president, and which will take place from May 27 to June 30, the last day of the administration of Juan Carlos Varela ( 2014-2019).

Varela appointed, last February, De Saint Malo, González-Revilla and the Minister of the Presidency, Jorge González, for the board of the ACP. The latter was the only one of the three that managed to ratify the National Assembly (AN) , on April 4, in a controversial session.

Both Roy and Jaén have held high-level public positions during the current administration, the same criticism received by those previously appointed.

Roy is currently Minister of Canal Affairs. He is also the general director and president of the board of directors of the Panama Metro. He graduated as a mechanical engineer from Georgia Tech University, where he did a master’s degree in industrial administration, and holds the title of civil engineer issued by the University Santa Maria la Antigua.

Marietta Jaén served as Deputy Minister of Public Works, a position she resigned on December 17 last year. She has a degree in civil engineering and applied mechanics with specialization in environmental engineering from McGill University, in Montreal, Canada.

Agenda: Other topics to debate
The call to sessions also includes the bill that approves the contract between the State and the company Minera Petaquilla, SA (now Minera Panamá, SA); and the one that creates the extraordinary, unique and uniform bonus for retirees and pensioners of the Social Security Fund.

The Presidency communicated that it chose to name an engineer with great capacity and experience in Canal issues and another with demonstrated capacity in large public and private infrastructure projects due to the ” challenges facing the Canal and the imperative need to advance in a work of infrastructure that allows the lakes that support the functioning of the Canal and the water treatment plants to be reinforced with new water sources […] “.

In addition, he noted that the designations are intended to seek greater consensus.

The appointments will be sent to the Commission on Credentials, Regulations, Parliamentary Ethics and Judicial Affairs of the Assembly for the first step in its ratification process. If approved by the commission, they would go to the plenary session.

Ernesto Cedeño , constitutional lawyer, sees “difficult” that the AN reaches a consensus to ratify Roy and Jaén. In this case, he says, the problem does not seem to be the preparation and capacity, because both are suitable. If there is consensus, he adds, the motivations of the opposition will not be known, because “something is going to be agreed upon”.

Cedeño was the one who filed the unconstitutionality lawsuit against the appointment of González (which is pending decision of the Supreme Court). However, he assures that this does not apply with Roy.

In an opinion sent to the Court, the Attorney General of the Administration, Rigoberto González, considered that the appointment of González conflicts with the Constitution , because when appointed he held a high public office.

This note was modified at 10:20 a.m. on Thursday, May 23, 2019. In the original text it was reported that Luis Fernando Tapia González was proposed as substitute magistrate; The correct thing is that he was nominated as a chief magistrate.