The (5) ODEBRECHT projects awarded under Varela Administration get lost in Martinelli fog. 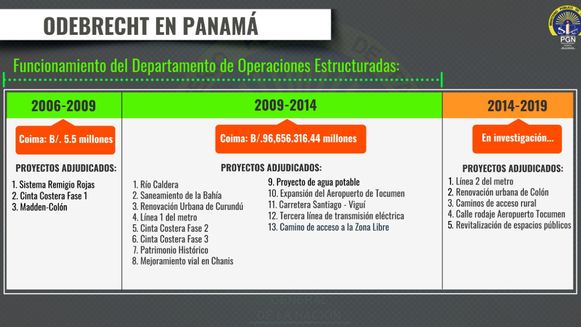 The Anti-Corruption Special Prosecutor’s Office reported that the investigation of the bribes that Odebrecht paid in Panama has an advance of 80%; could end in the first quarter of 2019; assets have been recovered for $ 255.1 million in money and goods apprehended; sum to 76 accused, 5 convicted and 628 volumes, and has required international cooperation from 23 jurisdictions.

Judge Óscar Carrasquilla endorses the State’s lawsuit against Odebrecht
Odebrecht will build extension of line 2
Cort has given key information to prosecutors about Odebrecht bribes
Odebrecht: half a million emails, under scrutiny
This was announced on Thursday at a press conference called by prosecutors Zuleyka Moore (who acted as spokesperson), Tania Sterling , Vielka Broce and Ruth Morcillo .

Although the investigation originally covered the period 2010-2014 – which corresponds to the government of Ricardo Martinelli -, Moore indicated that the investigations have already been extended to the years 2006-2009, when Martín Torrijos was president of the country, and the first projects were awarded to Odebrecht in Panama: the Remigio Rojas system, the coastal belt (phase 1) and the Madden-Colón highway, as reported by La Prensa two and a half months ago .

In a graph shown during the conference, it is appreciated that five projects awarded in the current administration of Juan Carlos Varela are being investigated.

“In the period 2006-2009, we have identified the traceability of the money that comes to legal and that goes to senior officials, we have identified, but we must comply with the formalities.You will find out who they are when they reach the prosecution. Be sure they will have to answer the questions of the Public Ministry, “said Moore.