Martinelli ends rumors of VP role; based off this picture he has other concerns 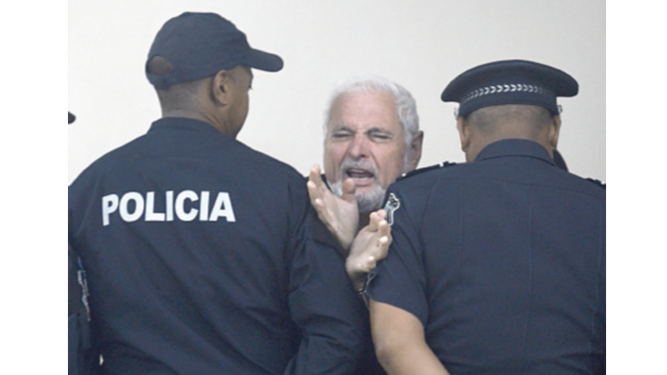 Formula Martinelli-Roux, the controversy takes the campaign of Democratic Change
Roux and Martinelli would be political formula for the elections of 2019
The ‘Constitution’, the former president and politics
Martinelli announced his decision through a manuscript from El Renacer, where he has been detained since June 11 in the case of the punctures.

Since four days ago, when Martinelli announced the possibility of being the vice president of Roux, sectors of civil society warned that his nomination would violate the Constitution , which sets a 10-year ban for presidential re-election.

In the note, Martinelli thanked Roux for having considered him a possible candidate for vice president and recommended him to choose as a running mate the former Minister of Public Security José Raúl Mulino, who competed against Roux in the past presidential primaries.

In this regard, former Minister Mulino said he read Martinelli’s note, but does not know what motivated him to propose it as Roux’s running mate.

This newspaper sent messages to Arias and Muñoz to give their opinion, but did not respond.

Martinelli explained that he will remain in his aspirations to be a candidate for mayor of the city of Panama and deputy of the 8-8 circuit (Juan Díaz, Parque Lefevre, Río Abajo and San Francisco).

The former governor is in the process of collecting signatures to aspire to the position of mayor of the capital for free application, despite the decision of the CD board, which on November 21 announced that he would nominate him as a candidate for that position.