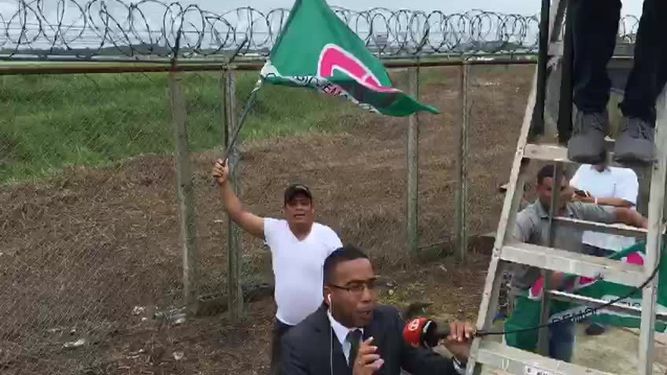 A group of supporters of former President Ricardo Martinelli , who arrived in Panama extradited from the United States, met on Monday morning, June 11, in the vicinity of the Tocumen International Airport and the Supreme Court of Justice.

Ricardo Martinelli arrived in Panama, extradited from the United States
The followers of Martinelli shouted slogans in support of the exmandatario, who spent 364 days in a prison in the city of Miami, Florida (United States).

The sympathizers are on the outskirts of the Supreme Court of Justice. My Diary / Alvaro Reyes
When the followers of Martinelli found out that the exmandatario arrived at the Tocumen airport, they gathered in the fence located in the area of ​​the old facilities of the air terminal.

The group carried flags of the Cambio Democrático party and shouted that “the madman has arrived”.

Meanwhile, outside the Supreme Court of Justice, supporters also carried flags and shouted slogans such as “Ring, ring, answer that Martinelli has arrived!”.

The United States extradited Martinelli, at the request of the Court, which prosecutes him for the unauthorized interception of communications from the National Security Council in the last two years of his term.