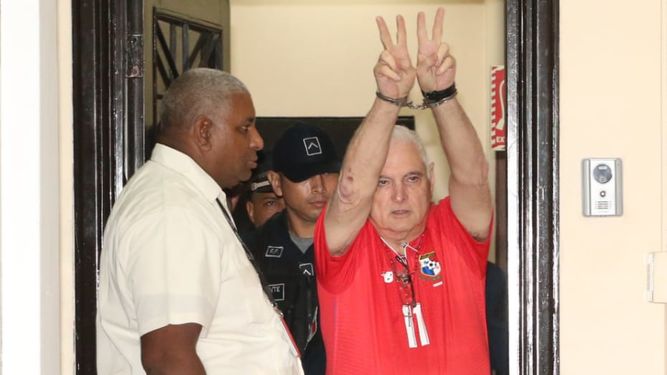 The plenary of the Supreme Court of Justice (CSJ) held a hearing on Tuesday to review the personal precautionary measures of former President Ricardo Martinelli , currently provisionally detained for the possible commission of crimes against the inviolability of secrecy and the right to privacy , and against public administration ( embezzlement ).

Martinelli and his possible options in front of the Supreme Court
Victims of the punctures ask the CSJ for independence
Ricardo Martinelli and the lifestyle of a persecuted
The exmandatario arrived at the hearing room of the CSJ, in the Palace of Justice Gil Ponce, handcuffed, wearing a shirt of the Selection of soccer of Panama and guarded by uniformed agents. He was taken from the El Renacer rehabilitation center, where he is being held since June 14, three days after arriving in Panama extradited from the United States, so that he responds – precisely – for this cause. He left at 8:15 am from El Renacer and arrived at 8:45 am at the Court. His admission to the courtroom occurred at 9:20 a.m.

On December 21, 2015, the plenum ordered the provisional detention of Martinelli, ten days after Judge Jerónimo Mejía -acting as judge of guarantees-declared him “in absentia” by not attending a hearing.