Unshackled Martinelli, a big problem for the Status Quo. 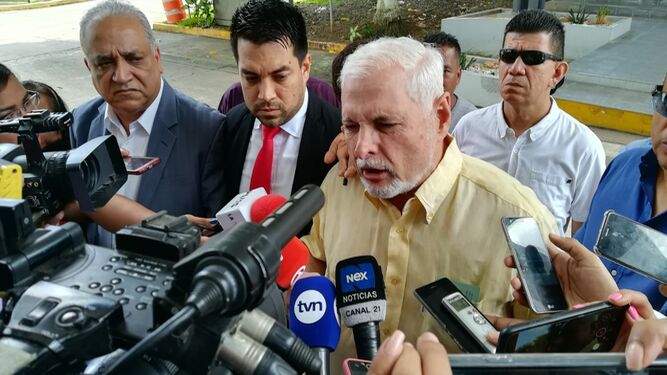 Criminal accusations of $10 Million in payments being alleged against Mejia’ and Di’az.

Former President Ricardo Martinelli (2009-2014) claims a payment of $ 10 million – $ 5 million each – to magistrates Jerónimo Mejía and Harry Díaz , whom he criminally accused on Thursday, November 21, for the alleged commission of the crimes of abuse of authority and violation of the duties of public servants.

Mejía and Díaz served as judge of guarantees and prosecutor in the process followed by Martinelli for alleged political and peculated espionage, when the case was the responsibility of the Supreme Court of Justice (CSJ). Later, on August 9, a court – formed by judges Roberto Tejeira, Arlene Caballero and Raúl Vergara – found him not guilty. The sentence was appealed to the CSJ.

In the complaint, Martinelli requests that specialists in psychology and psychiatry of the Institute of Legal Medicine and Forensic Sciences (Imelcf) practice an expert report, “in order to record the sufferings caused by this situation and to keep documents in the file, the damages suffered on a personal, family, heritage and economic level. “

The former president maintains that Mejía and Díaz’s performance as a judge of guarantees and prosecutor, respectively, prevented the “really” knowing who were the perpetrators or those responsible for the “alleged” espionage, and that they should be called to respond to Rolando López. , director of the National Security Council in the government of Juan Carlos Varela (2014-2019)

Martinelli refers in his complaint to an opinion of the Working Group on Arbitrary Detention of the Human Rights Council of the United Nations , which said that “the deprivation of freedom of Ricardo Martinelli is arbitrary, because it contravenes articles 9, 10, 11, 19 and 21 of the Universal Declaration of Human Rights and articles 9, 14, 19 and 25 of the International Covenant on Civil and Political Rights, and falls under category III ” . The decision is not binding, although it indicates alleged defects in the arrest of the former president pending his trial, which ended on August 9. The Working Group did not visit Panama, did not consult independent experts and limited itself to evaluating the information submitted by the interested party.

The complaint was presented at the National Assembly, given the position held by Mejía and Díaz.