Despite the agreements reached in the incomplete and misnamed “Single Dialogue Table” – not representative of all national sectors – the protests and street closures continue, creating the image that in Panama respect for authority has been lost its perpetrators matter little the economic damage they do to the rest of the population.

Despite the agreements reached in the incomplete and misnamed “Single Dialogue Table” – not representative of all national sectors – the protests and street closures continue, creating the image that in Panama respect for authority has been lost its perpetrators matter little the economic damage they do to the rest of the population.

The destabilizers aim to generate greater anxiety and uncertainty to deteriorate our international image with its effect on the investment grade and our reputation. The damage is palpable in the reduction of tourism, banking services and obtaining credit on favorable terms. They want to create the perception that we have no government and we enter a drift of lack of control and anarchy.

On the other hand, we note that the government seems determined to continue aimlessly and without a horizon, oblivious to the proportions of the suffocating political crisis. As has happened before, those in power are the last to realize that they are sinking into the mire. The same thing happened to Noriega.

There is no crisis control or communication skills. A strategic approach on how to overcome the situation is unknown. They seem to be suffocated by the slaps they give, as in the matter of the unanswered discount on medicines. The main figures of the government and the PRD have disappeared from the scene during the terrible six weeks of this crisis.

Has the president of the PRD, Benicio Robinson, said anything? You only see him moving from there to here in the Budget Committee of the National Assembly. That is also the case of his discredited Secretary General, Rubén de León, who since he was elected to that position three months ago has shown more of an ostrich than a León.

Have you heard voices of support for the National Police from President Cortizo or the nervous Vice President Carrizo, for the tremendous effort made to avoid a fatality in the demonstrations, the primary objective of the radicals who took over the protests? Or to some deputy of the PRD, different from that of Crispiano Adames, to say this mouth is mine?

The problem that looms in the country lies in the lack of decisions by President Cortizo, sick or not, but almost absent from this crisis and in the silence of the PRD that does not accompany him at all, due to their internal struggles to see what side favors the crisis.

The project of Cortizo and the people around him, by their own decision, all friends and close to Carrizo, does not lie in resolving the current crisis. Against all odds and despite the voices that warn of the dangerous course the country has taken, Cortizo persists in the project of turning Carrizo into a presidential candidate for 2024. In light of all the serious polls, it is a totally lost goal. If Cortizo does not desist from that purpose, the internal struggles within the PRD will continue, which seems non-existent today and its effects on governability and the prolongation of the current political crisis.

It is up to the president, thinking about the future of the country, to dismantle this absurd candidacy as soon as possible and finally decide to bring into his fold the different factions of the PRD that currently do nothing but add fuel to the fire.

The National Assembly has been silent because within its plans it does not contemplate reducing its exaggerated budget, to contribute to the solution given the lack of resources that the government suffers. Entering the campaign they will try to increase them more. The Comptroller General will continue with his recklessness of him, as if everything was fine, by continuing to dream of being president. The only ones who have made sensible proposals have been former presidents Ernesto Pérez Balladares and, lately, Martín Torrijos, neither of the two with greater influence in decision-making.

The realities I describe are well known and analyzed by the destabilizers who are currently behind the continuing closures and protests. They are not interested in solutions. They get what they want through the constant chaos, caring little about the damage they cause to others. The embassies of Cuba, Nicaragua, Venezuela, Russia and China, all conspirators, should be very proud of what they have achieved with the investments made in their pupils in the backyard.

It has been said ad nauseam that Cortizo must give a change of direction to straighten the collision course to which it is taking the country. If Cortizo cannot continue, let him find a way to attend to the most important thing in his life: his health.

In the end, Panama will thank you. 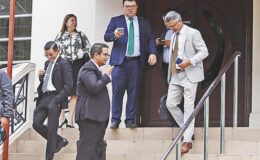