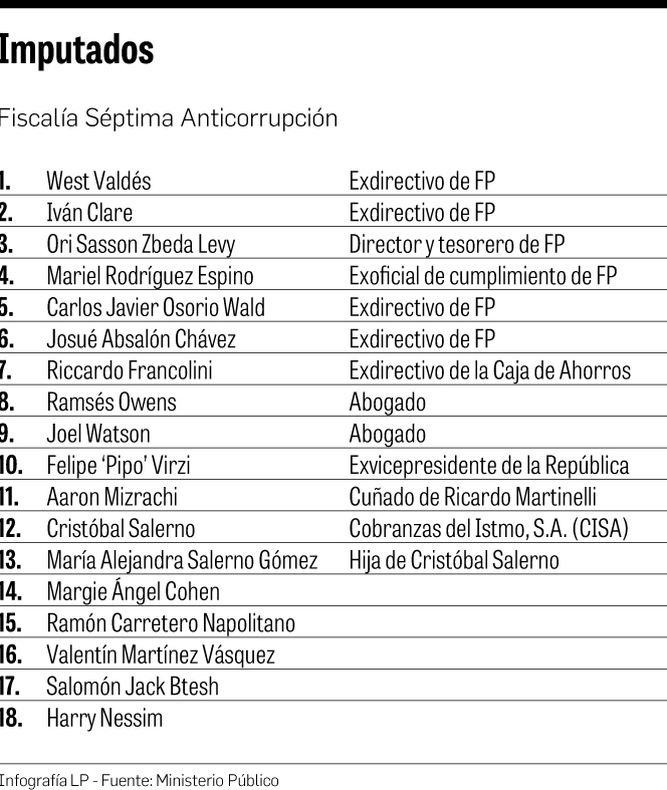 The Seventh Anticorruption Prosecutor’s Office yesterday issued orders to investigate 18 people, as part of the process that follows for the alleged commission of the crime of money laundering, linked to the alleged use of privileged information at the Financial Pacific (FP) stock house during the government past (see list).

The investigation is related to a complaint filed by the Superintendency of the Securities Market (SMV) in 2015 , in which it accused the companies High Spirit Overseas and Jal Offshore , both with investment accounts in FP, of receiving funds of origin unknown, to buy Petaquilla Minerals shares .

The lawyer Ramsés Owens, beneficiary of Jal Offshore -a registered company in Belize-, and Joel Watson , also allegedly linked to it, were investigated yesterday by the prosecution. They were not imposed precautionary measures and both must return tomorrow, Friday, to continue paying their discharges.

Owens, Watson and Riccardo Francolini – the latter also noted in the case – filed yesterday afternoon before the Supreme Court of Justice (CSJ) writs of habeas corpus against the orders issued by the prosecution to be conducted.