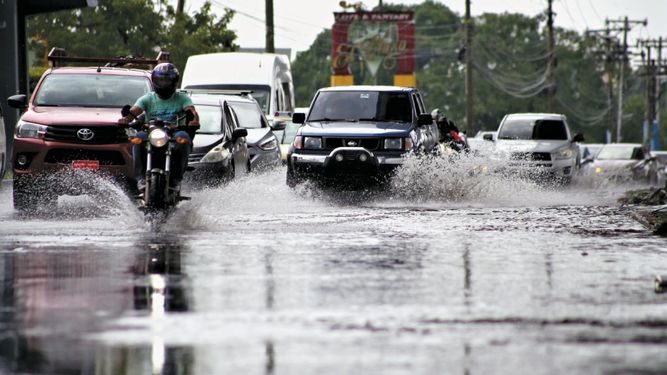 Last June 10 it rained less than an hour in the district of Panama and several points of the city were flooded. Among them: Ricardo J. Alfaro avenue in front of Cochez, Domingo Díaz avenue, San Antonio and Don Bosco, in addition to Balboa Avenue, in front of Urracá Park, in the path of Bella Vista.

Hours of chaos due to rain and strong winds
This Monday also rained for 45 minutes in corregimientos such as San Francisco and Bella Vista, and the results were disastrous: roof blasting in the community of Carrasquilla, flooding in the Spain route and the fall of 46 trees.

All that without mentioning that the same avenues that were flooded in June, also suffered during these new rains. It is a new pattern that according to experts has been repeated and consists of short and intense showers.

In fact, representatives of the College of Civil Engineers of Panama, experts from the Water Center of the Humid Tropics for Latin America and the Caribbean (Cathalac), former Public Works Ministers and local authorities agree that these new rains, together with the lack of planning and the accumulation of garbage, are the causes of intervened points such as Urracá Park, in Bella Vista, or the descent of Salsipuedes, in Santa Ana, continue to accumulate large amounts of water when it rains.