MI MAR environmental movement to be in Panama on JUNE 8th. SUPPORT 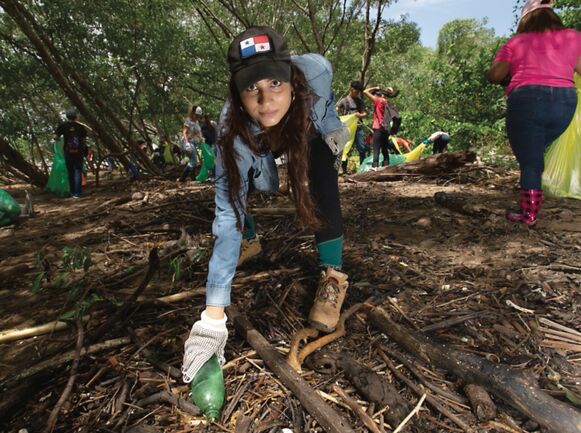 Read this related article about how much “Plastic” humans are consuming from La Estrella.

A year ago the Mi Mar Movement was born, with the slogan of promoting green awareness through social networks, talks and cleanings of beaches, a task that is highlighted on a date like today, World Environment Day.

In the heart of Juan Díaz’s mangrove , where the garbage that drags the tide reigns, Serena Vamvas takes a plastic “bath”. He sits on the rubbish carpet, asks everyone’s attention and braces between bottles, cans, foam containers, cartridges, disposable cutlery, tires and discarded toys: “We swam in trash! Literal! We drown in plastic! ”

Vamvas is the leader and founder of the Mi Mar Movement, a volunteer group that has been promoting environmental education in Panama for a year through talks, workshops, videos, corporate social responsibility programs and beach and mangrove clean-up days.

When the time of field work arrives, Vamvas, 28, puts on his gloves, adjusts his cap, distributes garbage bags, responsibilities, pushes the task and speaks before, during and at the end of the mission: ” Look around … There is garbage everywhere, garbage that was thrown to the street or to the rivers. Observe the extent of the problem. Let’s go! Let’s do something for our planet. ” Vamvas is pure “green” energy.

A few weeks ago they called for a cleaning of Juan Díaz’s mangrove and about 300 volunteers who came to the call in two hours removed almost four tons of garbage, mostly plastic. Just four of the 4 thousand 800 tons of garbage that are produced daily in Panama (2 thousand 500 only in the capital city) according to calculations of the Inter-American Development Bank and the 8 million tons that arrive every year to the ocean, according to UN Environment.

The volunteers of Movimiento Mi Mar have been collecting garbage from different points of the Panamanian geography: Chiriquí, Colón, Panamá Oeste and Casco Antiguo, Costa del Este and Juan Díaz in the capital city. In each call the attendance has oscillated between 100 and 300 participants. People who get up early on a weekend day to get among the waste and feel the seriousness of the pollution caused by human activity, highlights the environmental activist.

In two hours, some 300 volunteers of the Mi Mar Movement filled their bags with almost four tons of filth that lay on the mangrove bay of Panama. Alexander Arosemena
Talks and presentations on recycling in schools, prisons and communities of Panama and San Miguelito complement the work agenda of Mi Mar which, to celebrate its first anniversary, will hold a new clean-up day on the coast of Panama Viejo, the first site they cleaned a year ago. It will be this June 8 from 12:30 noon to 5:00 pm

The movement is born

As a child, Vambas frequently visited the beaches of Colón, especially that of María Chiquita, a family destination for vacations. But a year ago, the experience was different. There was much more trash than in previous years. So much that Vamvas took a cartridge and collected what he could, which was almost nothing that was thrown everywhere.

The feeling of uneasiness accompanied him back home and it was when he made a determination: “You have to do something. We can not stay behind a social network complaining, you have to take action, you have to go out to work, push for the change to begin. ”

He contacted friends with affinity for nature and together they thought of a name and logo for the group, they planned the logistics, they made a digital poster and launched their first activity through WhatsApp contacts and social networks: cleaning the beach that precedes tourism ruins of Old Panama.

That “word of mouth” or “chat to chat” managed to gather almost 300 people who shared the desire to do something, even if it were minimal, to mitigate the effect of pollution, says Vamvas.

The volunteers of the cleaning day made a human chain to remove the waste from Juan Díaz’s mangrove. Paola Ying
Then, it was evident that there were many people eager to know and practice more of the green culture, concluded Vambas and other collaborators of the movement, such as Aubrey Baxter , 35, and Marcos Santiago, 20, two of the collective leaders who arrived to one of the activities of Mi Mar after finding by chance a promotional poster on the internet and have not been separated since then. The group works using social networks to share news and videos about the damage to the environment and biodiversity, adding partners such as Bio Bags, which provides bags for beach cleanings, and Panama Waste Management, responsible for transporting waste that are collected.

The talks, presentations, videos and garbage collection have one objective above the rest: educate. “The word education is very important. Beach cleaning and other services are useless if there is no education in communities and schools to show children the damage that has been done to the environment in recent decades, especially with plastic, we have plasticized everything! “.

The initiative to remove everything that is thrown on the coast, continues Vamvas, conveys a message to people, beyond the site is dirty again: the hope to see that there are more people who want a change. “Those who have participated return with more people. It is a chain in which everyone changes their thinking to separate garbage, use a thermos instead of a disposable cup, a reusable bag or not drink a liquid with reed (…) Habit changes are difficult, but They are the ones that will help us reach the goal: a cleaner world “.

The good environmental vibes spread through social networks
The Mi Mar Movement has just over 7,500 followers on social networks. He is present on Instagram and Twitter identified as @movimientomimar and on Facebook as “My Sea Beach Cleanup”. Through these accounts, they share details of their community activities and the calls for cleanings of beaches and mangroves in various parts of the country.

The next one on the agenda will be held this June 8 on the coast of Panama Viejo .