WORLD NEWS: Amid Brexit debacle, UK Prime Minister May to step down. 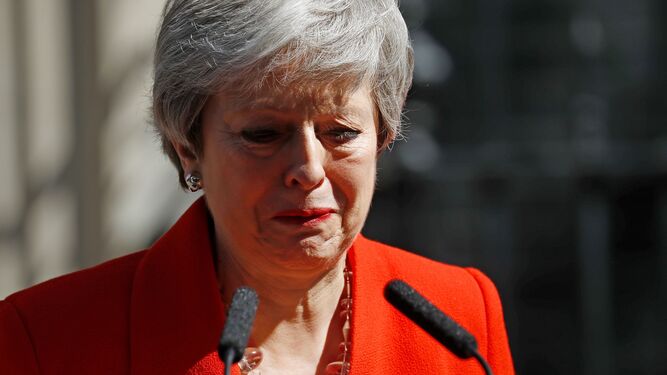 Visibly moved and with a broken voice, British Prime Minister Theresa May announced Friday that she will leave office in two weeks, recognizing, after months of chaos, her inability to make accept the Brexit agreement she negotiated with Brussels.

Critics corner English minister
“I tried it three times” but “I was not able” to get Parliament to approve the text, he said in a statement before the television cameras in front of the famous black door of number 10 Downing Street, his official residence in London.

“I think it was right to persevere even when the chances of failing seemed high, but now it seems clear to me that the interest of the country is better than a new prime minister leading that effort,” he added, proclaiming his love for the United Kingdom with a broken voice. and on the verge of tears.

That is why “I will resign as leader of the Conservative Party on Friday, June 7,” he announced.

May will continue in this role to receive the president of the United States, Donald Trump , who will make a state visit to the United Kingdom from June 3 to 5.

Moment when Theresa May leaves the conference. AFP
The following week will begin the process to appoint his successor, a race that is expected to present numerous candidates but for now the only one who officially announced his ambitions is the controversial former Minister of Foreign Affairs, Boris Johnson .

May made this announcement a day after, after the postponement of Brexit – initially scheduled for March 29 – the United Kingdom was forced to participate in the European elections almost three years after the June 2016 referendum in which the 52% of Britons voted in favor of leaving the bloc.

The conservative head of government, who came to power in July 2016 following the resignation of her predecessor David Cameron after the surprising result of the referendum, wanted at all costs to carry out the mission to get her country out of the European Union, but for months it had been increasingly weakened.

After a year and a half of arduous negotiations with the EU, on November 25 it had managed to sign with its 27 European partners a Retreat Treaty that in 585 pages contains the conditions of the British exit, from the invoice of 39,000 million pounds that will have to Pay United Kingdom up to the rights of expatriates.

But this agreement disappointed both the pro-Europeans and the eurosceptics: for the former it distances the United Kingdom too much from the EU, for the latter it keeps it too close.

The House of Commons rejected the text three times between January and March. In the first, May had to endure the worst defeat ever suffered by a British government in Parliament: 432 deputies voted against and only 202 in favor.

However, true to her reputation for perseverance, the conservative leader had announced earlier this week a fourth desperate attempt to achieve parliamentary acceptance of an agreement, including demands from the Labor opposition.

However, these were not enough to convince the political left and further enraged conservative eurosceptic rebels who decided not to wait any longer to demand their immediate resignation.

“We need a new prime minister, a new government and a new approach to Brexit,” one of them, David Evennett, had tweeted.

However, the appointment of a new leader of the party and the negotiation with Brussels does not seem aimed at solving the political chaos that shakes the United Kingdom around an issue that deeply divides the country.

The EU has made it clear on repeated occasions that it is not willing to renegotiate the agreement and it remains to be seen if it accepts, if necessary, a third postponement of the Brexit date, now scheduled for October 31 at the latest.

“The person who will probably succeed Theresa May, be it Boris Johnson or Dominic Raab or Michael Gove, will be a supporter of a hard Brexit,” Scottish Prime Minister Nicola Sturgeon warned on Thursday after voting in the European elections.

And he warned that this could “make many people in Scotland see the benefits of becoming an independent country within Europe.”