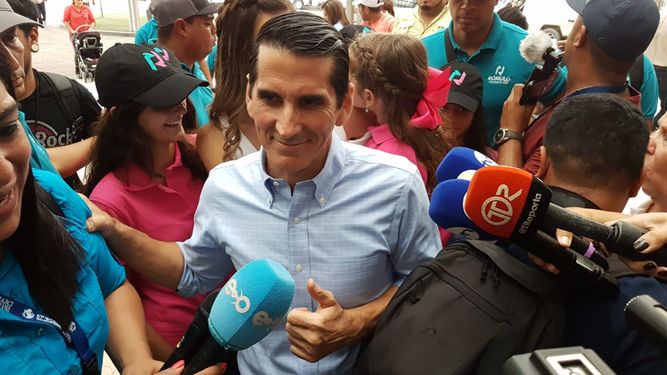 ‘We are close to getting the country out of the hole where Varela has put it’: Roux
Roux prevails in the presidential CD primaries; Mulino recognizes his defeat
José Raúl Mulino accuses Yanibel Ábrego of preventing entry of juries in Capira
Ricardo Martinelli follows the election of CD from El Renacer
A double Knockout
Eight months ago, Rómulo Roux , 53, a lawyer specializing in commercial law, snatched the presidency of the party from its founder, former President Ricardo Martinelli.

Last night he stayed with the presidential candidacy of that political group, after obtaining the support of 67,331 voters: 68.8% of the few who went to the polls.

With the support of the CD deputies, Roux defeated José Raúl Mulino, who carried the baton of the “Martinelli loyalists”. It took 28 thousand 693 votes, 29.3%.

Rómulo Roux, the man to whom the circle close to the former president: Luis Eduardo Camacho, Marta Linares de Martinelli, Alma Cortés, Frank de Lima and Alejandro Pérez, among others, at one time branded him a “traitor”, and whom Mulino baptized as “Varela’s nephew”, is now the strong man of CD. It says the weight of his two hats: the president of the party and presidential candidate.

In neither of the two positions does Martinelli appear in the equation. He is no longer part of the board of directors, nor would he have control of the presidential candidate. Although he was careful to say who he supported, there are several winks that hinted that he supported Mulino. His brother Mario Martinelli yesterday rose to the house of the former minister; his wife Marta Linares was seen very close, and even lent him a helicopter for the candidate to move to the interior and a donation of several thousand dollars that Martinelli made to his campaign.