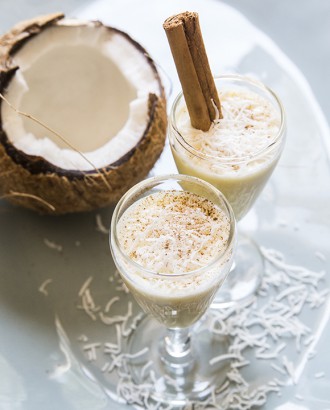 Not only has this been a great first year for me personally on PNO.com. But my wife has also been able to use the forum as a way to meet and socialize with other people who have moved here.

In the spirit of the Holidays, she asked one of the site visitors to see if they had anything to contribute to anyone who may visit the site.  So the first EX-PAT RECIPE will be contributed by Emily. Emily is 55 and has lived in Panama for almost 4 years. Her husband is from San Juan, Puerto Rico and as a result every holiday she is tasked with making the traditional LATIN EGG NOG of “Coquito”.

She has said this is the way she has made it for years, and perhaps a few of you would like to try it as well.

B) Blend them until they are well-mixed and then pour into a glass pitcher or bottle and cover it and place in refrigerator.

C) Keep refrigerated for at a minimum of 1 hour before serving. This drink tastes better when it is very cold.

D) Transfer to the empty rum bottle used and shake to mix well right before serving. Pour into a small glass and sprinkle the top with nutmeg or cinnamon or garnish with a cinnamon stick if you prefer.