Panama: And the steps needed to move into the next phase on world stage. 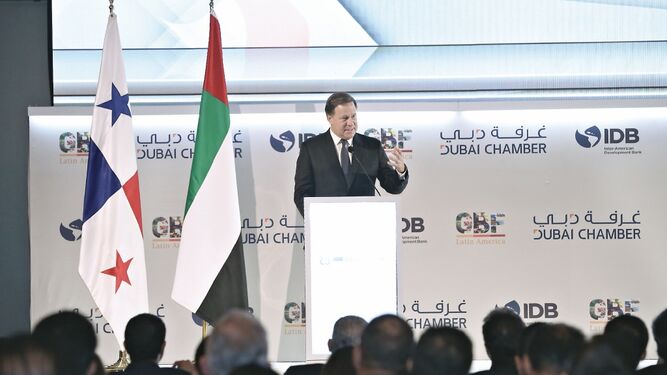 Taking advantage of the advantages offered by logistics, strengthening institutions and improving human capital through education are the three main ingredients of the recipe that could turn Panama into a decade in a country with similar incomes to the nations of southern Europe. .

This is what Luis Alberto Moreno , president of the Inter-American Development Bank (IDB) believes, who participated yesterday in the opening session of the Global Business Forum Latin America, an event organized by the Dubai Chamber of Commerce and Industry, in partnership with the IDB .

Moreno said that in the last 60 years, only a small group of countries managed to go from having middle income to high income. Currently, in his opinion, in Latin America, Panama, Uruguay and Chile would be in a position to make that leap, but to achieve it, there are pending tasks.

In the case of Panama, one of the keys is to improve the rule of law. “All the institutions are behind the development of the country. That is the great challenge that Panama has ahead, “Moreno told a question from this newspaper.

From the point of view of economic activities, the executive observes opportunities in logistics and how to take advantage of the competitive advantages that the country has to become a hub for electronic commerce.

A relationship with the potential to grow

This relationship, moreover, is concentrated in Argentina, Brazil and Mexico, the three largest economies in the region and representing 76% of trade with the Gulf countries.

“Our trade concentrates on raw materials. And although in each region we have companies that have invested in the other region, direct investments are scarce. We have a huge opportunity, “said Moreno.

For the president of the IDB, one of the keys to boost commercial relations is “to get to know and understand each other better”, something that can be achieved with the opening of diplomatic offices and commercial offices, as well as with the negotiation of commercial agreements. With these actions, Moreno predicted that bilateral trade could grow by more than $ 13 billion annually.

A move in that direction is being made by the Chamber of Commerce and Industries of Dubai, through the holding of this type of forums and the opening of offices in the region, one of which is in Panama.

Majid Saif Al Ghurair , director of the board of the Chamber of Commerce and Industry of Dubai, said that “the forum has been key to share trends that are guiding the development of markets in Latin America and the Caribbean, as well as details on the opportunities that this region can offer to companies in the UAE, including the more than 231 thousand that are members of the Dubai Chamber. ”

The event was attended by the President of Panama, Juan Carlos Varela , and the Vice President Isabel de Saint Malo de Alvarado .

Varela highlighted the similarities of both countries despite the physical distance that separates them, specifically because they are open economies that act as hubs in their respective regions. Consulted on the status of the direct flight between Dubai and Panama announced by the Emirates airline in 2016 and that has not materialized, the president said the airline is looking for alternatives to operate the flight with a technical scale.

For his part, De Saint Malo de Alvarado talked about the efforts of Panama to improve education and vocational training, on the advantages of reducing the gender gap to promote the growth of economies and the next investment opportunities in Panama in ports and in the logistics areas that the Panama Canal Authority is projecting on the waterfront.