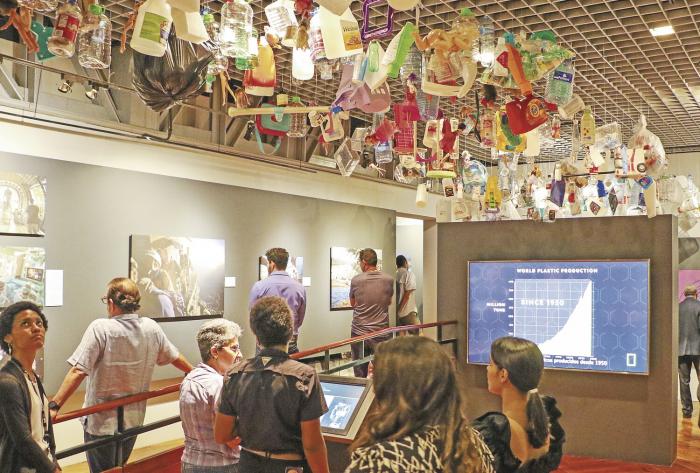 Bottles, toys, and other personal items hang from the ceiling of the Panama Interoceanic Canal Museum. About 600 types of plastic are part of ‘Planet or plastic?’ of the National Geographic Society, an exhibition that rethinks the usefulness of this necessary material, but at the same time harmful to the environment due to the uncontrolled use promoted by man.

“The exposed information is National Geographic’s multi-year effort to raise awareness about the global plastic waste crisis,” explained Víctor Echeverría, one of the three curators who are part of the temporary exhibit work team.

According to Echeverría, the exhibition was worked on in synergy between the Museo del Canal and the National Geographic Society, which provided the information “and we adapted that information and images to the museum’s curatorial space.”

Echeverría explained that: “Each photograph, identity card, text, infographic and the route suggested for visitors became part of the exhibition’s message. The installation itself and each suspended plastic element gave meaning to the speech”, he added to La Estrella de Panamá.

‘Planet or plastic?’ It is made up of 54 photographs, six explanatory panels and three videos that reveal the harsh problem: each year, around 9 million tons of plastic waste end up in the ocean and, according to different studies, could remain in the marine environment for up to 450 years. .

Panama, part of the problem

The exhibition provides data on the impact caused by the use of plastic in the world and in Panama, and how this material affects a large number of animals in the sea. “In the investigation of the use of plastic in Panama, we focused on looking for data related to consumption and waste, and how these two points could lead our visitors to action. Taking into account that the daily production of waste in Panama is 2.06 pounds per person, that is equivalent to 191,580 tons of waste produced by the total population of the country,” revealed Echeverría.

In the post you will also have access to information about the movements in Panama that have joined this fight for sustainability and about other ways to reduce the consumption of single-use plastic.

For her part, Monique Chevalier, co-founder of the Waste Revolution foundation, explained that the onegé together with the museum carried out the ‘Trash Talk’ discussion that included a visit to ‘Planet or plastic?’ “The exhibition opens the doors to important conversations about the current state of our planet, but above all it urges people to take action. The work that the museum is doing is extremely important, because it is educating about the huge problem that exists today. For someone to reflect and change their habits, they need to first understand the problem, and what can be done”, the activist highlighted to this medium.