Guaido ramps up rhetoric in firm defiance of Maduro. 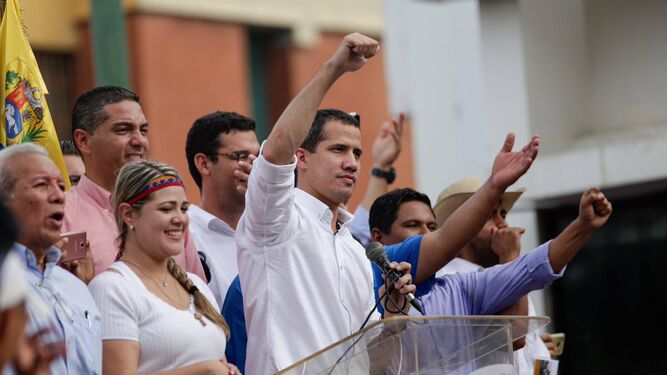 The president of Venezuela in charge Juan Guaidó defended this Sunday the sending of delegates to Oslo in a mediation of Norway in the Venezuelan political crisis, warning critics of his own side with this way that they can end up being accomplices “of the dictatorship” of Nicolás Maduro.

Guaidó affirms that the Venezuelan opposition will not allow a ‘false dialogue’
“He who does not understand that we have to play on all the boards, that we have to have an active presence in all places, (…) then is cooperating with another cause,” said Guaidó in front of hundreds of followers in Barquisimeto, Lara state. (West).

“From Lara to Norway, from Caracas to Washington, our demands are the same, whoever wants us to renounce the pressure on the street or to international scenarios for the cessation of usurpation, becomes an accomplice of the dictatorship,” he later wrote on Twitter. .

Guaidó confirmed on Saturday the sending of representatives to Oslo to hold a first face to face in the coming days with his counterparts of the Maduro government, continuing the mediation of the Scandinavian kingdom, whose efforts were announced last week.

The parliamentary leader, recognized as interim president by half a hundred countries, has shown caution to this initiative, knowing the unpopularity of the dialogue between an opposition sector, disappointed by four failed attempts since Maduro came to power in 2013.

Netizens in social networks and writers have criticized the Norwegian initiative as an erroneous strategy and even a capitulation of Guaidó.

“We all have the right to criticize, because we are citizens, to demand, and I, who am a public servant, to listen clearly, but we also have to (…) go forward,” said Guaidó, who has reiterated that it will lend itself to a “false dialogue” that gives Maduro oxygen.

Guaidó, locked in a struggle for power for four months with the socialist leader, has stressed that any negotiation should lead to “the cessation of the usurpation” of the presidency by Maduro, a “transitional government and free elections.”

Since he was proclaimed president in charge on January 23 after the opposition majority parliament declared illegitimate the re-election of Maduro, Guaidó led large street demonstrations while calling to turn to the military, still loyal to the socialist leader.

But since a failed military uprising on April 30, the protests have diminished and Guaidó has stressed that all strategies remain in force, such as diplomatic pressure or international “cooperation”, at a time when the United States, its main ally, is still discard a military action.