Debt grows but remains in lockstep with Economic Growth

The debt of the non-financial public sector increased by $ 322 million during the last year and stood at $ 24,376.7 million at the end of July.

$ 24,386 million debt
Since 2014, when the government of President Juan Carlos Varela began , the increase is $ 6,750 million, according to the reports of the Public Financing Directorate.

The growth of the economy in this time has made the relationship between debt and gross domestic product remain stable, below 40%. 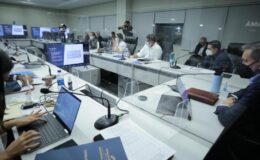