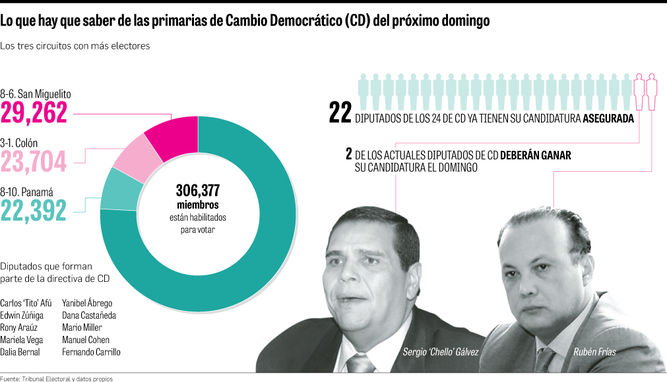 A total of 22 of the 24 deputies of Cambio Democrático (CD) will not have to worry about seeking the votes to secure their candidacy in the primaries that the party will hold on September 30.

Deputy Cold: business and payroll
Mayín Correa will be substitute for Ricardo Martinelli as pre-candidate for deputy
They postpone primary elections of Cambio Democrático in Guararé
Martinelli will collect from October signatures for Mayor of Panama
Only the candidacy of two deputies will be submitted to election: that of Sergio Chello Gálvez , in 8-7 – which groups the districts of El Chorrillo, Betania, Pueblo Nuevo, San Felipe, Ancon, Calidonia, Curundú, Santa Ana and Bella Vista -, and that of Rubén Frías on 8-5, in La Chorrera, province of Panamá Oeste.

The rest will save resources and energies for the general elections of 2019, when they will play, like those who win the Sunday primaries, face the candidates for deputies of the different political parties in the country.

Why are Gálvez and Frías the only ones who will go to primary schools? According to Rony Araúz, director of CD organization, “they decided to do it and their decision is respected.”

However, neither Gálvez nor Frías supported Rómulo Roux in the primary school on August 12, when Roux obtained the candidacy.

Several of the deputies who benefited from this decision are part of the board of directors that Roux presides over, and that has as its general secretary the president of the Legislative Body, Yanibel Ábrego , who also has his reserved space in Capira (circuit 8-2 ). That is, they made a decision that directly benefited them.

Many of these deputies have been questioned, among other issues, for including family members in the 080 form, and for the use of circuital items in community meetings. 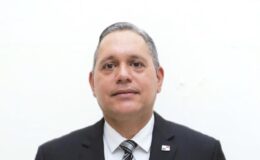 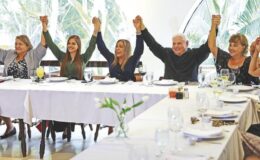