“Carnival” where Culture and Politics form the perfect mix 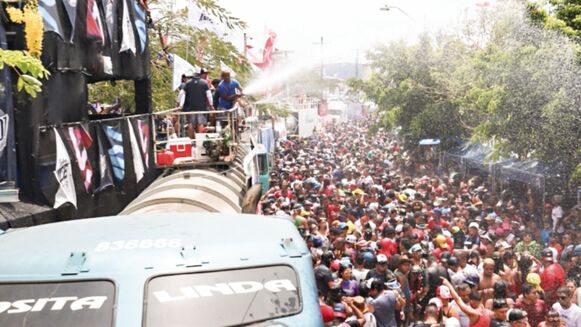 Candidates to different positions of popular election officially began yesterday the search for the votes for the general elections of May 5, in full Monday of Carnival .

Candidates start today the election campaign
The presidential ones carnival in Las Tablas, Chitré, the Villa of Los Santos and Penonomé, among other places of the country, where they distributed different promotional articles and reiterated their plan to govern.

The campaign also moved to social networks, in which each political maneuver tries to sell the strengths of its candidate in times of citizen initiatives such as # noalareelección and # pelaelojopanamá. The party and politics continue today, Tuesday.

Monday of Carnival in Penonomé, Coclé. The presidential candidate who visited that Carnival area yesterday was Marco Ameglio. Ana Rentería
The taste of Carnival Monday

The electoral closure purged the carnivals in Penonomé. The harmony and peace of this city during the current festivities contrast with the vibrations of five years ago, when the political campaign cornered the spirit of the parranderos.

Then you could see the logos of the ruling party of the time -Cambio Democrático (CD) – even on napkins. The comparsas, the fences and the light poles were colored in pastel shades and the cacophony of a sung triumph was so great that when the hand changed to the ruling ruler the streets did nothing but hammer their defeat.

Culecos in Penonomé, yesterday Monday of Carnival, first day of political campaign. Ana Rentería
This time, things are different. Expired yesterday the prohibition to proselytize, the aspirants and the citizenship show, for now, of civility. The capital of Cocle showed it yesterday, with a respect comparable to some Scandinavian country. No “torments” or impertinent provocations between political comparsas.

In Villa de los Santos there was water, folklore and politics. Alexander Arosemena
The people of Laurentino Nito Cortizo, presidential candidate of the Democratic Revolutionary Party (PRD), crowded into a corner house next to the area known as El Manguito, in honor of a tree whose fruits, paradoxical with the campaign, are green.

There was Leandro Avila , deputy of the PRD, pleased with the decision of the highest electoral body. “It was perfect what the Electoral Tribunal did. Two months are enough for the candidates to make their proposals known. The Panamanian already knows how to make decisions, “said the candidate to be re-elected as a deputy of the circuit 8-6, San Miguelito.

A few steps away, on the way to a street that for hours seemed like a bazaar in the City of Knowledge, was one of the candidates that embodied the campaign of # noalareelección: Juan Diego Vásquez, who wore his version rumbera amid friends and family.

On the contrary, Vásquez said that apart from the ban, “it’s hard to divide in just two months.” “But still, we have already been in several key places: Saturday in San Miguelito; yesterday in Las Tablas; and today [yesterday], here in Penonomé. ”

But what does it have to do with Penonomé if you are from a capital circuit? The candidate for independent deputy was questioned by the circuit 8-6. “Because although it is true I have affinities with my circuit, it is also true that I have to watch over the interests of the whole country,” he answered.

Shortly after the independent candidate came to the Presidency Marco Ameglio. They received him kindly in one of the centenary houses of Penonomé. With Ameglio, a corpulent man, of military walking and a smile that could be detected meters away, an interview, a photograph, became impossible. Parranderos said: “just passed by here.” Or: “It’s on that stage.” And: “suddenly they know in that house”. All effort was in vain.

The color of the elections in Penonomé, the real taste of politics, was appreciated on Sunday. Ricardo Lombana , candidate for the Presidency for the free application; the PRD deputy Zulay Rodríguez and José Gabriel Carrizo , vice presidential candidate of the PRD, and several other political figures visited Penonomé.

Music and rhythm to make the parranderos dance. Ana Rentería
Propaganda and marketing to seduce the electorate
05 Mar 2019 – 00: 00h

The start of the campaign of the presidential candidates not only spearheaded the carnival. It also relied on social networks, in which most of them published elaborated videos with messages that try to seduce the electorate.

Rómulo Roux , candidate of Cambio Democrático (CD), for example, appears in a wedge next to his formula buddy, Luis Casís, in which they use the phrase: #LoBuenoVuelve. It promises to rehabilitate the economy, affordable inputs and support for women.

Meanwhile, Laurentino Cortizo , of the Democratic Revolutionary Party, based the video on the slogan “The Good Government”. Projects hopeful images of citizens in different tasks.

The video of José Blandón, from the Panameñista Party, calls for “uniting the country under the flag of Panama.” While the campaign of Saúl Méndez, of the Broad Front for Democracy, released a video in which the candidate is seen talking to people at a public event.

The candidates for free postulation Ricardo Lombana and Marco Ameglio, meanwhile, uploaded photos, videos and livestreams to Instagram and Twitter from the carnivals of Penonomé, Chitré and Las Tablas, parties in which they distributed merchandise with their logos.

The also independent Ana Matilde Gómez, for her part, uploaded images to the social networks accompanied by her proposals. In several of the photos appears next to his candidate for vice president of the Republic, Jorge Arango.