Bocas protests continue in defiance of re-election of Robinson. 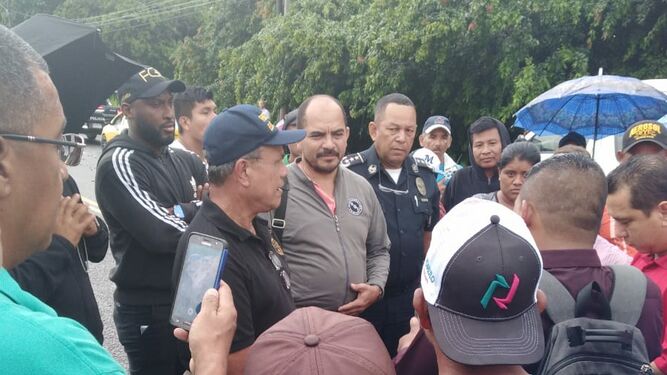 The governor of Bocas del Toro province, Esteban Chacón, moved to the closing area in the Electoral Tribunal (TE) office on estate 11 (Changuinola) on Wednesday, with the presence of electoral attorney general Eduardo Peñaloza.

As reported, the prosecutor Peñaloza will meet with a commission of the demonstrators to engage in a dialogue at the headquarters of the TE.

The protesters have remained on the streets today, despite the heavy downpour that is falling in the province.

Bocas del Toro remains closed. Special for La Prensa / Pedro Rodríguez Sanjur
At around 9:00 p.m. on Tuesday, those opposed to the PRD deputy Robinson being re-elected, called for actions in the streets, which began with a caravan in front of the TE offices in Changuinola.

The complainants have also asked this entity to call new elections since, in their opinion, there have been “many inconsistencies and irregularities.”

The closures are in the community of Finca 51, in the corregimiento of Guabito; on farm 11 in front of the offices of the TE; in La Y of the Almirante district, as well as in Bajo Cedro and Cilocokric, on the Chiriquí Grande-Almirante highway.

It is worth mentioning that, on the morning of this Wednesday, there were fights between those who support these actions and those who do not, in front of the TE headquarters in Changuinola. Security has been reinforced by the National Police.

Those who reject the reelection of Robinson proceeded last night with the closure of streets. Special for La Prensa / Pedro Rodríguez Sanjur
It is also important to note that the circuit board, which is located at the headquarters of the Technological University of Panama, continues with the count to define the second seat.

The PRD Robinson is not in the province.

Today, through his Twitter account, Robinson, current president of the PRD, called on the Electoral Tribunal to expedite the scrutiny process in Bocas del Toro and thus report the results. Rupilo Abrego, his deputy, stressed that they are waiting for the act of proclamation to take place soon.

After these events, Ubaldo Vallejos, candidate for deputy of the circuit 1-1 by the Panameñista Party, called for the prevalence of calm, above private interests.