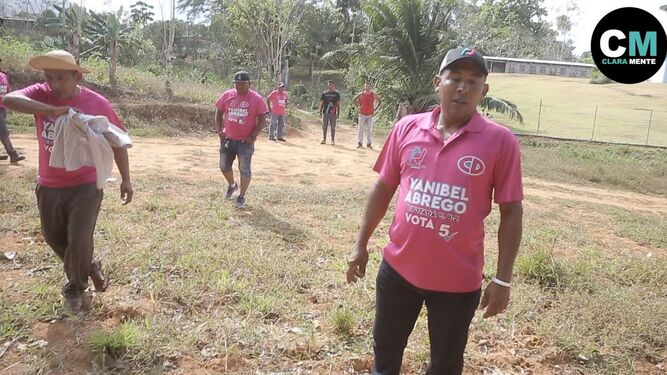 Activists of the president of the National Assembly, Yanibel Ábrego , were surprised by the digital platform team Clearly when they were about to distribute supposed bags of food in the village of Cirí de Los Sotos, in a mountainous and isolated area two hours from Capira.

Mauricio Valenzuela, a reporter from Claramente, narrated that they followed a caravan of vehicles labeled “Yanibel Ábrego” and that they had goods in the back, covered with tarpaulins. They arrived at a property where the activity would take place.

The reporters recorded from the street and the aggression immediately began. “Who paid you to come and do this?” One asked. Another claimed why they were recording, “Retreat, retire,” he told them. Minutes later they threw sticks and stones and damaged a camera.

Leaders of journalistic unions repudiated the fact. Atenógenes Rodríguez , former president of the National Journalism Council , said it is regrettable that the president of the Assembly and candidate for reelection concealed the delivery of food bags to the media.

Eduardo Quirós , president of the Forum of Journalists for Freedom of Expression and Information , who is also vice-president for Panama of the Press Freedom Commission of the Inter-American Press Association , described the event as “serious”. He mentioned two aspects. “First: Political campaigns are public. There is no such thing as a political event within a private property. The entire electoral process is governed by the Electoral Code and the Electoral Tribunal (TE). And second: The media have the responsibility to cover the process in all its instances for the benefit of citizens, therefore, it is inadmissible that they try to prevent journalists or media from covering the process. ”

He added that what happened yesterday deserves a quick action from the TE and a prompt declaration by Abrego, whom this media called at least five times to give his version of the event, but did not respond.