The Time Warner Center , where is the writing of the American chain CNN in New York, was evacuated this Wednesday, October 24, after a suspicious package was received in the mail classification office .

In New York they evict CNN by suspicious package similar to those received by Obama and Clinton
The New York Police Department noted on Twitter that it is investigating a suspicious package in the area. For its part, CNN quoted a source from the security forces as saying that the authorities are treating the device as a real explosive.

CNN announced that it evacuated its ” newsroom ” at the Time Warner Center in Manhattan as a precaution.

It was previously known that unknown persons sent two packages with explosives to the offices of former President Barack Obama in Washington and to the house of former Secretary of State and former Democratic presidential candidate Hillary Clinton in New York, the US secret service confirmed Wednesday. 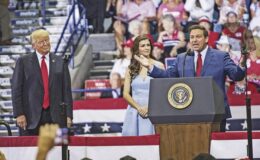