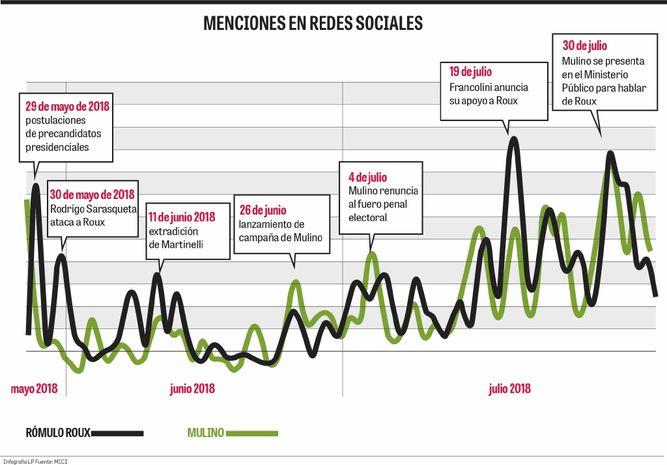 The Democratic Change (CD) party officially opened its candidacies for presidential candidates on May 28, and as it approaches August 12, the decisive date in the process, it seems that the contest focuses on two candidates: Rómulo Roux and José Raúl Mulino

He is excanciller and current president of Cambio Democrático (CD). He snatched this position to Ricardo Martinelli in the elections of the board of directors last January.

It has 36 thousand followers on Twitter, of which 94% are real. Your Facebook page has 65 thousand “likes”, with an action percentage of 1%.

Since May 28, Roux has been mentioned 8 thousand times in social media publications.

He was Minister of Public Security from 2009 to 2014. He has 36 thousand followers on Twitter, of which 92% are real. Your Facebook page has 14 thousand likes and an action percentage of 1%. From his candidacy to precandidate, his name has been mentioned in social networks in 10 thousand occasions.

Some of the words associated with Mulino are “mouths”, “force”, “bombs” and “president”.

For Mulino and for Roux, those who broadcast these messages are mostly men over 35 years old, living in the capital, according to a network monitoring carried out between May 28 and August 4 last.

The one who did not stay out of this contest in the social networks was the ex-president Ricardo Martinelli, detained in El Renacer jail for the case of the punctures.

Martinelli was mainly linked in the messages to Mulino. The posted messages that included these two characters contained words such as “family”, “radars” and “traitors”