Over a MILLION gather in Hong Kong for Human Rights protest 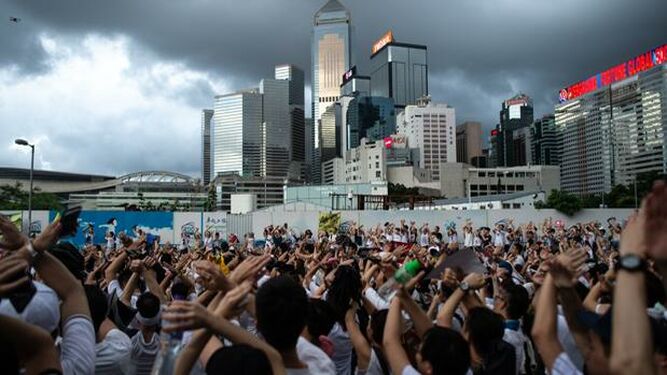 Hong Kong witnessed this Sunday, June 9, the largest demonstration since it stopped being a British colony, in 1997, when more than a million people, according to the organizers, protested against the plan to allow extraditions to mainland China.

The demonstrators marched under a scorching summer heat through the narrow streets of the main island of this financial center, in a noisy and colorful demonstration in which the government was asked to backtrack on their plans.

There was no reminder of a similar demonstration that gathered 1.5 million people during the 1989 colonial government in support of the protesters in Tiananmen Square.

“There are 1.030.000 people in the demonstration today,” said one organizer among the cheers of the crowd.

The police, which historically gives figures much lower than those of the organizers, calculated that the maximum number of attendees was 240 thousand, which is still their second highest estimate since the transfer of the ex-colony to China.

Sunday’s protest was easily on a par with that of 2003, when an estimated half a million protesters forced the government to set aside a deeply unpopular national security law.

This project by the authorities of Hong Kong pro-Beijing will leave the population at the mercy of an opaque and politicized Chinese judicial system, argue their detractors, although it is not clear that the leaders of the city are going to change their position.

The initiative has attracted criticism from jurists, financial circles and Western diplomats.

Marco Ng closed his coffee to join the procession. “Our city is more important than my trade,” he said. “If we do not protest, the government will not take our concerns into account,” he added.

“The voice of the people is not heard,” said Ivan Wong, an 18-year-old student. “This law will not only affect Hong Kong’s reputation as an international financial center, but also our judicial system. This has consequences for my future, “he said.