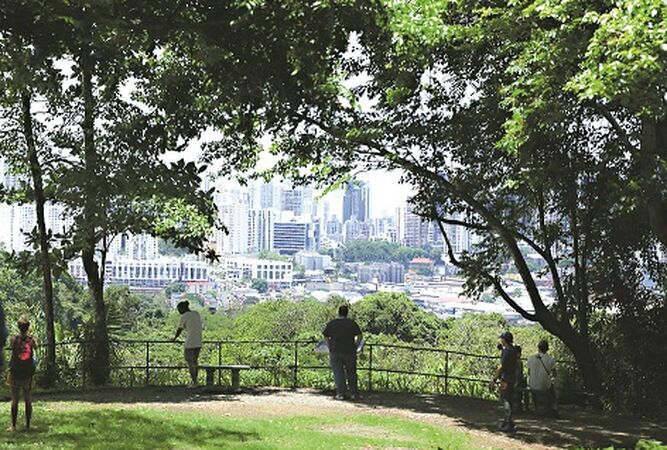 $ 5 million will be invested to create cultural and artistic areas, as well as new trails and facilities to increase the influx of visitors.

Enter the domain of the Metropolitan Natural Park is a blow to the senses. The change in temperature is immediate and, despite being a few meters from a busy avenue, at times the silence is overwhelming and its greenery transports people out of the bustle of the capital.

The park is responsible for eliminating 30% of the polluting gases that are produced in the capital city. In its 232 hectares inhabit hundreds of species of animals and plants, which make it one of the few parks that is within a city.

Damage to the environment
With the construction of the North corridor, the Metropolitan Natural Park lost 56 hectares. In the last decade there have been attempts to remove another 15 hectares to build the headquarters of the National Police and a workshop for Mibus buses.

About 49 thousand people visited him last year and toured some of the 7 authorized trails. 29 thousand Panamanians and the other 20 thousand foreigners. This amount only represents 14% of the total that the park can receive annually, about 350 thousand people.

To increase the influx of visitors, the park’s board has launched an investment plan of 5 million dollars to add spaces that allow cultural and physical activities, but respecting its main attraction: nature.

A few meters from the Juan Pablo II avenue, but hidden by a barrier of trees, is the castle, an anti-aircraft bunker built by the US Army.

This building has walls 45 centimeters thick and will be renovated to house cultural events rooms, spaces for reading, music, history, and an area to climb.

The bunker, known as the Castle, was built by the US Army. It will be rehabilitated with cultural, artistic and meeting rooms. Gabriel Rodríguez
The restoration, together with the parking area, will entail an investment of 3.2 million dollars, which represents 56.2% of the budget of the master plan that will be executed until the year 2024.

When administered by a board, the park does not receive state contributions, so it must manage its own funds through concessions within its area of ​​jurisdiction. In addition, more than one million dollars have been recovered as compensation for damages caused by the installation of pipes and other public and private infrastructure.

Dionora Víquez , executive director of the Metropolitan Park, commented that the plan was updated by consultant Roberto Baca , who has vast experience in the development of protected areas and natural reserves in Costa Rica.

In addition to the rehabilitation of the bunker , which would have an auditorium for 300 people, the plan includes the creation of three new trails. The “marmoset monkey trail”, one of the most visited, will also be rehabilitated, and potable water sources will be installed on the top of Cerro Cedro, which at 150 meters above sea level is the second highest point in the city. capital, only surpassed by the 190 meters of height of Ancón hill.

From Cerro Cedro you can see around the panorama of the capital city. Gabriel Rodríguez
Víquez commented that among the improvements is the creation of a path for cyclists and a route from where fruit trees with species that most Panamanians do not know, such as jobo, will be observed. Likewise, the lagoon will be expanded so that it becomes a reservoir for the animals that live in the park.

The Costa Rican consultant added that once the execution of the plan is completed, the capacity of the park will increase to 520 thousand people per year and with the entry of the new government, the board of the park trusts that it will be included as one of the most important natural attractions of the country, since in recent years the park has been neglected.

During the decade of the 60’s of last century, the US Army used the area where the Metropolitan Natural Park is located as a training zone for rescues in the jungle. Likewise, it was used to train the astronauts who led the special race for the United States, such as Neil Armstrong. This story, as well as the indigenous, Spanish and military finds, will be part of the historical gallery that will be designed in El Castillo or the ‘ecobunker’.