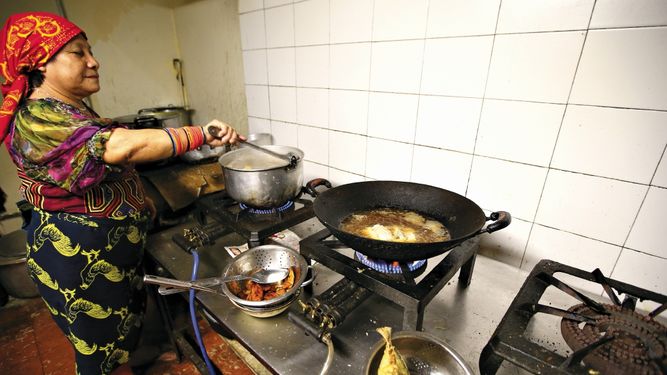 To get to the Cartí Sugdub community center in Santa Ana, you have to know the way. On H Street, just behind the Presidente Remón Polyclinic – or 17th Street – there is a small hall with a plot of land on one side of a half-finished building. Then, on the left, there is a small entrance with a corridor that leads to the restaurant in the center. There is no sign that says anything, only on the wall of the place, which only sees who has the intention to get there.

It is one of the few gunas in the city of Panama, one of the corners of mixture between the ethnic groups that live in the city. And in these times of discrimination, those who are not indigenous enough, serves as a point of cultural conviviality.

The menu of the inn is simple. The main course is the dulemasi, a soup with coconut milk, green bananas, yucca and squash; in another dish, a parboiled fish that may well be saw or needle, accompanied by a lemon and a chili. The broth has no salt, so the order always comes with a container that once served for a tomato sauce and now contains salt.

They also sell fish with patacones. And if it is a special day for the gunas, one can have luck and taste a dish that is a kind of guacho rice with coconut milk. None of the dishes cost more than $ 4.