Guaido reaffirms support of Military that abandons Maduro in favor of his leadership. 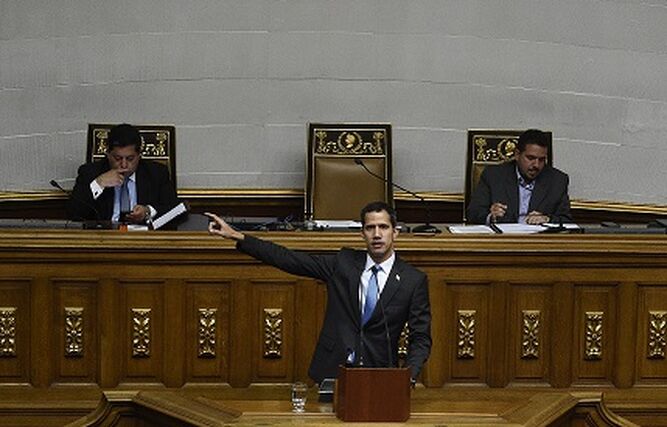 The military that abandons Venezuelan President Nicolás Maduro will keep their ranks and will be reinstated when a new government takes office, according to an agreement approved on Tuesday by the opposition majority parliament.

Trump reaffirms that EU evaluates ‘all options’ in Venezuela
The crisis in Venezuela was addressed by presidents Varela and Duque
Guaidó begins to prepare mobilization to Miraflores
In a new attempt to get the Armed Forces to break with Maduro and recognize the parliamentary leader Juan Guaidó as interim president, the Legislative offered new guarantees to the military, the main support of the socialist leader.

Guaidó is recognized as president in charge of more than 50 countries, including the United States.

“It is guaranteed that every military professional citizen who decides to act to restore the constitutional order and not to obey in the future whoever usurps power in our homeland, will also be reincorporated into the Armed Forces,” says the text approved by the plenary of the Assembly. National.

inRead invented by Teads
Consequently, the officers who rebel will respect “all their acquired rights, both in degree and in decorations, in case it is unconstitutionally intended to degrade and expel them from the institution,” the document adds.

The Parliament stressed that, in this way, the chain of command will be preserved, pointing directly to the leadership that has repeatedly reiterated its loyalty to Maduro.

The agreement approved on Tuesday is in addition to an amnesty bill that Guaidó offered to the uniformed – with broad political and economic power – to turn their backs on the ruler, without any member of the high command has yet been separated.

All the decisions of the Assembly are considered null and void by the highest court of justice, of the official line, which declared it in contempt in 2016.

Guaidó plans a national mobilization towards the presidential palace of Miraflores, in Caracas, as he has said to assume his control.

However, he acknowledges that he must first have the Armed Forces “fully aligned”.

Last weekend he reiterated that he has “contacted” officials “throughout the country” to ask them, in the face of this mobilization, not to repress the opposition demonstrators and to contain armed groups pro-government by means of intelligence tasks.

The opposition does not rule out asking Congress to approve a foreign military intervention to get Maduro out, an option that is on the table, US President Donald Trump reiterated on Tuesday during a meeting with his Brazilian counterpart, Jair Bolsonaro, in Washington. .

You misspelled the word “Gorgas” on your website. Sometimes errors like can hurt your web traffic. Maybe check out a service that alerts you to issues like SpellReport.com or CheckMySite.com.