Get up to speed on your latest ODEBRECHT update. Panama’s Favorite Vendor 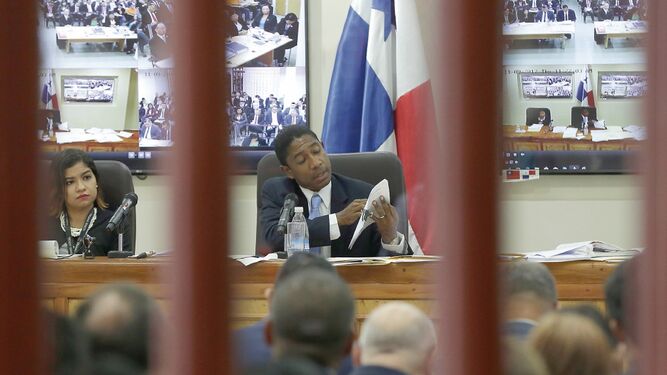 The Twelfth Criminal Court annulled the order of inquiry (of November 21, 2018) and the correction to this document (of December 6, 2018) issued by the Special Anticorruption Prosecutor’s Office against Fotis Lymberópulos , as part of the investigation of the bribes paid by Odebrecht.

In a ruling dated May 3, Judge Óscar Carrasquilla admitted an incident of controversy filed by the defense of Lymberópulos -who is outside the country-, which rendered void the order of investigation by which charges were charged for the alleged commission of crimes against the economic order.

The links with the Odebrecht case
After receiving a new line of information from international judicial assistance, the Special Anticorruption Prosecutor’s Office issued an order of inquiry for businessmen Fotis Lymberópulos and Rodrigo ‘Rod’ Díaz. Both are linked to companies that, according to the file, would have received payments of bribes from Odebrecht from the Madden-Colón highway project and the coastal strip.

On November 21, 2018, the prosecutor’s office ordered the investigation to Lymberópulos, but made an error at the time of placing the legal basis, since he used as a rule infringed by the defendant a law that at the time of the facts attributed to the employer It was not current.

It turns out that this law, of May 2007, by which the Penal Code was adopted, would come into force one year after its promulgation, that is, in May 2008, one year later than the events attributed to Lymberópulos. .

Due to this error and based on Article 999 of the Judicial Code – which allows corrections of errors committed in the resolutions – the prosecution proceeded to make the corresponding correction and placed as a foundation articles 389 and 390 of the Penal Code .

Arguments of the judge

According to the judge Carrasquilla, the correction of the investigation order to Lymberópulos by the prosecution established ” as proven the existence of a crime of money laundering, as a crime precedent of international bribery, according to Article 389 of the Criminal Code , was not classified for the time of the occurrence of the facts investigated.

According to the judge, among the preceding crimes of money laundering, considered by the legal regulations at the time of the facts that are charged to the defendant, ” the figure of international bribery was not found, which was included as precedent ” later.

The prosecution has announced that it will appeal the decision of Judge Carrasquilla, since it did not take into account the correction made by that investigation office.

In the ruling, the judge stated that the file states that Lymberópulos was linked to the investigation of the bribes based on the collaboration agreements that Odebrecht entered into with the prosecutor’s office, in which relevant documentation was provided, such as payment orders executed by the Department of Structured Operations of the construction company to the company Marpesca Seatrade LLC ., for a total amount of $ 686 thousand, in the year 2007.

The alleged payment orders to the company linked to Lymberópulos were made on April 10 and 17, and May 11, 2007.

Despite these evidence included by the prosecution, and the alleged payment of bribes to Panamanian officials, the judge overturned the order of inquiry to the defendant.

In another proceeding, the Fifteenth Criminal Court revoked in March 2017 the order to investigate Fotis Lymberópulos, issued by the Second Anti-Corruption Prosecutor, as part of the process that follows for alleged overpricing in the rental of helicopters with funds from the now-defunct National Assistance Program. (BREAD).

In this decision, the fifteenth criminal judge, Leslie Loaiza , concluded that the audit of the Office of the Comptroller General of the Republic – included by the prosecutor’s office in the file – did not take into account aspects such as free supply and demand in the valuation of the costs of The flights did not locate technical personnel specialized in aeronautics to quantify the real cost of the services of the company Heliflight Panamá, SA, of Lymberópulos.

The prosecution filed an appeal after this ruling, but the Second Superior Court of Justice upheld the decision of Judge Loaiza.

Then, the Public Ministry filed an appeal before the Supreme Court of Justice, but this court, through a ruling of February this year, decided to close this process followed by Lymberópulos.

In another case, the Court also declared null the investigation of Lymberópulos for alleged money laundering, an offense derived from the investigations of the former Minister of Social Development Guillermo Ferrufino in a process of unjustified enrichment. Supposedly, Ferrufino acquired a van with money from two companies linked to Lymberópulos.

In that ruling of November 28, 2017, under the testimony of Judge Oydén Ortega, the plenary of the Court revoked Order No. 52 of April 28, 2017, issued by the Second Court of Justice, and modified the decision of the then first criminal judge, Rolando Quesada Vallespi, who declared this case null, both for Ferrufino and Lymberópulos.

The Supreme Court, however, decreed nullity only with respect to the entrepreneur Lymberópulos, and not in the case of former Minister Ferrufino.