As predicted here on PNO.com BEFORE elections,,,,,,Varela/Roux defection from Martinelli validated. 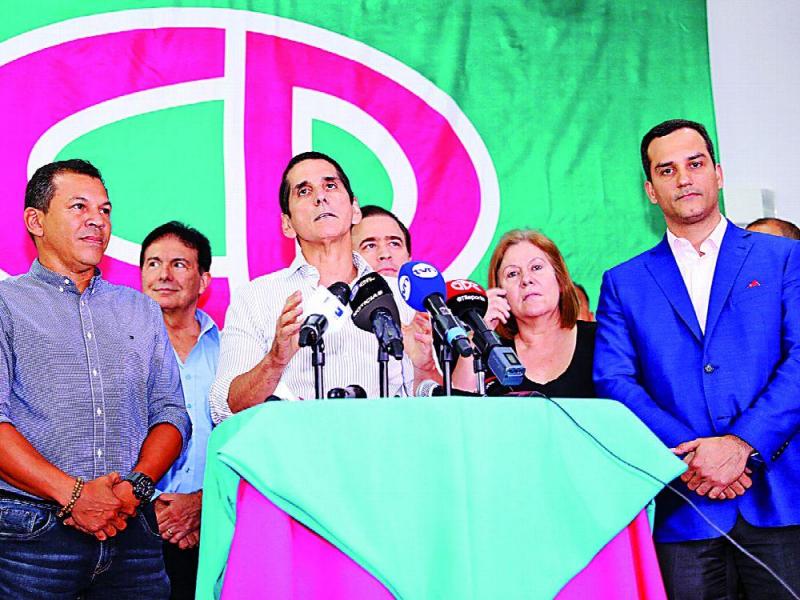 I’m not going to break my arm patting myself on the back, but I have to state that SO MUCH of what was transparent and visible about the manner in which Varela and Roux were trying to distance themselves from Martinelli, while at the same time needing him so very much were proven to be TRUE.

Merely look at how things have played out since Election Day. I for one have stated for YEARS now that the manner in which Varela has persecuted Martinelli will come back to bite his ass. Rather than casually distance himself, he tried to paint himslef as an innocent, and that just did not hold water with former CD loyalists.

The leadership led by Rómulo Roux has dedicated these days to claim irregularities in the electoral process. Ricardo Martinelli says that Roux lost because he did not defend it. The ex-minister José Raúl Mulino asks to renew the leadership in charge of non-reelected deputies

After the truce over the electoral process and the adverse outcome of the aspirations to return to the Presidency of the Republic, the internal struggles in the Democratic Change (CD) party have surfaced.

Such is the situation that the call to unity made by the group’s founder, Ricardo Martinelli, has been forgotten.

In this case it seems that it is Martinelli himself who forgets the unity in the ranks of his party and in his usual messages handwritten in yellow pages that he broadcasts through his spokespeople reveals the differences.

Even, there are already forces that have raised the need to renew the leadership and remove the deputies who were in charge since Rómulo Roux won the presidency of the group.

Martinelli, who just a few weeks ago, before May 5, asked for the vote for Roux as a presidential candidate, has changed his mind and reproaches his performance, before and after the date on which the new authorities of his collective were elected .

In a public letter, Martinelli himself assured that Roux had lost the presidency long before the elections.“He did not come to visit me and he fought him timorously,” he said when his candidacy for mayor and deputy was snatched from him.

About Roux Martinelli said ‘he thought he did not need me because he was a born and charismatic leader …’.

Roux was elected president of the Democratic Change party after beating Martinelli, who until then had been the only one to occupy that position. The exmandatario’s followers called him a “traitor” because in addition the Martinelli factions did not gain any space in the collective’s board.

The internal crisis in the party worsened when the deputies supposedly ‘loyal’ to the former president gave his support to Roux.

‘How happy I feel that almost everyone who betrayed me lost their seats. Treason is paid at the polls, “Martinelli added.

RENEWAL OF THE DIRECTIVE

In another letter that was made public through social networks, José Raúl Mulino, former Minister of Public Safety and friend of Martinelli, said that these deputies can not continue directing the group.

‘A CD can not agree, under any pretext, that these re-elected deputies continue directing the collective. A comprehensive political restructuring of all instances is necessary, “argued Mulino.

The former minister also encourages the former president to be considered an unavoidable reform, considering that he shares with the candidate for the presidency the votes obtained on May 5. ‘It’s time for sensible decisions,’ Mulino said.

Roux managed to become the flag bearer of the presidency of the opposition CD by beating Mulino. In an aggressive campaign, the former Minister of Public Security called Roux a traitor and identified him as the nephew of Juan Carlos Varela, current president of the Republic, whom they blame for a political persecution against Martinelli.

Mulino was one of the last ones who added his support to the candidacy of Roux. After his defeat in the primaries he insisted that Roux was a traitor and that’s why he would not support him. At Martinelli’s request, Mulino forgot about the conflicts and joined the Roux campaign.

The current president of the National Assembly and one of the few re-elected deputies who supported Roux, Yanibel Ábrego, has a special page on Martinelli’s recriminations. The leader of the CD detained at El Renacer sent another letter this weekend. In the manuscript, he asked the other deputies of his party not to attend any meeting promoted by Abrego.

The legislative bench of the CD will be the second largest

deputies will make up the new legislative caucus of Cambio Democrático.

deputies of Cambio Democrático in the current National Assembly.

thousand dollars had to pay the residents of Capira who contested the proclamation of deputy Yanibel Ábrego.

has the CD party for years. He is currently opposed to the elected government of Laurentino Cortizo.

According to the former president, “Yanibel is for her, not for you and much less for the people.”

In the elections of May 5, the deputy of the 8-2 circuit was re-elected with 12,107 votes, according to official data from the Electoral Tribunal.

But this is not the first time that the secretary general of Cambio Democrático has frictions in her party or with Martinelli.

Mulino says the party will be opposition to the Democratic Revolutionary Party, which won the presidential election and the majority of the National Assembly. In addition, he is convinced that the party must be prepared and trained by 2024. ‘The statutes require adaptation to advance in agreement and direction as a party, not as an unthinking montonera against the mayorales’, concludes the former minister.

Cambio Democrático won 18 seats for the National Assembly that will be installed on July 1.

The current leadership led by Rómulo Roux has advanced that the party will be opposition to the administration than between July 1, led by Laurentino Cortizo Cohen.

THE CD ACHIEVED 18 CURULES IN THE ASSEMBLY

After the results of the elections on May 5, the presidential candidate of the Democratic Change party (CD), Rómulo Roux, came in second place and his party won about 18 seats in the National Assembly.

In the case of Yanibel Ábrego, although she received her credential as an elected deputy, a group of residents of the 8-2 circuit, Capira district, led by Eduardo Vásquez, filed a challenge against her election.

According to the plaintiffs, there are videos and other evidence showing that there was patronage and that some goods were given in exchange for the vote, which is prohibited by the electoral rules.

In order to contest the election, the plaintiffs had to collect the sum of $ 25,000, a figure that the Electoral Code establishes for this claim.

So far, it is not known that the elected deputies have met to define how they will act, once they begin their management.