15 Days and Counting: Signs point to showdown between PRD and CD. Cortizo still comfortably ahead. 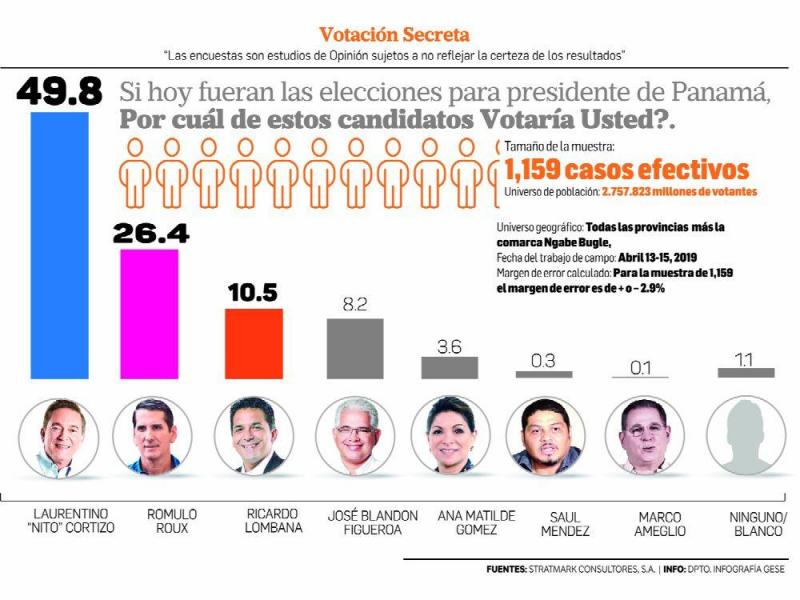 To fifteen days for the presidential elections of May 2019, an opinion study conducted by the company StratMark Consultores SA for Protesa and La Estrella de Panama suggests that the results of the elections will be a duel between the candidates of two parties opponents.

So far the results of the latest studies carried out by the company StratMark Consultores SA indicate that Laurentino Cortizo Cohen, candidate of the Democratic Revolutionary Party (PRD), and Rómulo Roux, of Cambio Democrático (CD), monopolize most of the intention of the vote , according to the study conducted based on scientific estimates and taking into account the requirements established in the Electoral Code and endorsed by the Electoral Tribunal.

The company carried out the last study the week between April 13 and 15 at the national level, for which the procedure of personal home interview was applied with simulation of vote in ballot box, and all the provinces of the country were taken into account. Ngäbe Buglé.

The survey was applied to 1,159 effective cases from a universe of 2.7 million Panamanians, a figure that corresponds to the Electoral Roll.

According to the results, 49.8% of the people who voluntarily agreed to participate in the study opted for Laurentino Cortizo Cohen, of the PRD, who is also supported by Molirena.

While 26.4% of those interviewed said they would vote for Rómulo Roux, candidate of the also opposition parties Cambio Democrático y Alianza.

According to the study, the other candidates would remain in a fairly distant position, especially compared to Cortizo Cohen, who capitalizes the intention of votes.

After the first two, and in a third place, would be Ricardo Lombana, candidate for the Presidency of the Republic for the independent ballot, who would receive the support of 10.5% of the people surveyed.

He is followed by José Blandón Figueroa, who is a member of the official Panameñista Party, although he remains aloof from the current president of the Republic, Juan Carlos Varela.

In a fourth position would be, according to the results of the survey, Ana Matilde Gómez, who would capture 3.6% of the intention of votes of the respondents.

Saúl Méndez, nominated by the Broad Front for Democracy (FAD) party, accumulates the intention of votes of 0.3% of the respondents; and Marco Ameglio would receive 0.1%.

The survey has a last box in which they chose the blank vote or none of the postulates, which reflects 1.1% of the intention of votes of the respondents.

The StratMark Consultores SA survey, according to the legal norm, takes into consideration that ‘Surveys are opinion surveys subject to not reflecting the certainty of the results’.

The study was applied in all the provinces, including the Ngäbe-Buglé comarca, to a sample of 1,159 people from a universe of 2.7 million voters, and the margin of error is + or – 2.9%. 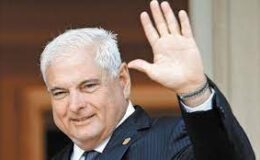 Lord get me to 2024………Despite attempts, “nothing to impede Martinelli from running”

The former President of the Republic Ricardo Martinelli Berrocal would not have any legal impediment to be the presidential standard-bearer of his Realizing Goals (RM) party, in the next general elections of 2024. Taking into account that the third criminal judge of the First Judicial Circuit of Panama, Baloisa Marquínez, …