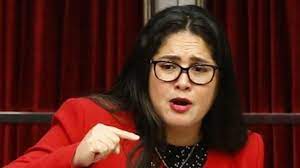 Deputy Zulay Rodríguez assured that the leadership of the ruling Democratic Revolutionary Party (PRD) and the government would be aligned “against him” to supposedly stop his aspirations to run for the Presidency of the Republic.

This was stated this Monday in the “Cover” of La Estrella de Panamá by the also presidential candidate for free nomination, who stated that she will not resign from the PRD.

“The Presidency’s slogan is not to help Zulay Rodríguez (…) from the Presidency they gave the order to support a candidate, who is between the second and third (on the list of signatures),” said the deputy.

The PRD member leads the collection of signatures for the office of president, a decision harshly questioned by various sectors that consider the candidacies of party members from the free nomination as a kind of tactic to leave out of the race those independent of the parties and they lack structure.

Rodríguez adds up to this Monday 50,630 signatures; In second place, with 45,845 signatures, the former Panamanian minister Melitón Arrocha, and in third place, Eduardo Quirós, also an expanameñista and who has 33,759. They are followed by lawyer Fernando Carreira (31,713 signatures), former deputy Katleen Levy (23,495) and university professor Maribel Gordón (21,324).

“There are no possibilities within my political collective, because it is kidnapped by the big shots who are very well with this government,” said Rodríguez.

Despite the fact that independent presidential candidates were born as an alternative to political parties, after the Supreme Court ruling in the case of Juan Jované’s candidacy in 2009, Rodríguez insisted on considering himself “independent”, although he later specified that it is “independent criteria within the PRD”.

Regarding the scandal of the support of the Institute for the Training and Use of Human Resources (Ifarhu), he denied that there was influence peddling in the case of financial aid for $61,000 to his daughter to, as he explained, cover part of the cost of his studies at a university in the USA.

“I have not stolen any 61 thousand dollars (…) but Zulay, for her husband to ask for assistance that she has to return with a commitment to pay, I am already stealing everything,” Rodríguez defended herself, insisting that the standard and that the accusations would be part of an alleged “dirty campaign” to “lower his candidacy.”

He announced that he will present the documentation of the Ifarhu file if the Public Ministry (MP) requests it.

Both the MP and the National Authority for Transparency and Access to Information have filed complaints to investigate how and under what conditions said economic aid was granted.