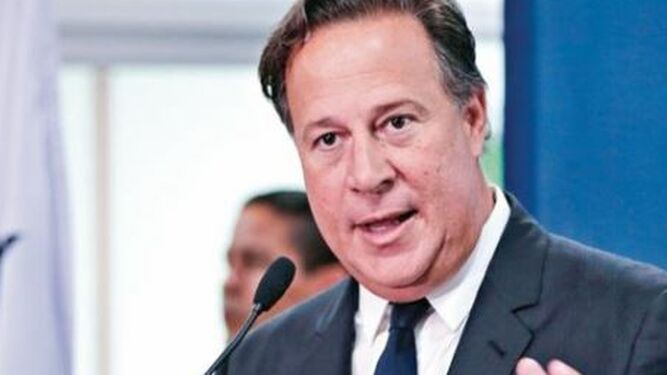 OP ED: Sorry people, but did Varela state from Shanghai, that he feels Martinelli is behind his leaked communications???? Did he hire Scooby Doo and Shaggy to handle the case? My reaction is one of “No Shit”.

The guy benefits from serving as VP. Fractures the party. Immediately turns of Martinelli. Goes after his family, has more shady deals than one can count, infects the General Assembly with favoritism, and on and on and on.

I’d say it’s a safe bet that “someone” who at least sides with Martinelli is behind it. That’s not a stretch in saying. Varela needs to stay away from a microphone and call his buddy Evo and ask for some tips.

Former President Juan Carlos Varela pointed to his predecessor Ricardo Martinelli as the alleged head of the anonymous site varelaleaks.com, which this week leaked his private communications, by WhatsApp messaging, between 2017 and 2018.

Varela acknowledged that some messages are “correct”, and other texts have been “manipulated, aimed at weakening the role of the State.”

Specifically, he referred to the alteration of the messages that he exchanged with his Minister of Economy and Finance, Dulcidio de la Guardia , about the inclusion of Abdul Waked and his companies, in the Clinton List of the US Department of the Treasury . In this case, he is pending resolution of a lawsuit that Waked filed against the National Bank of Panama (BNP), in which he claims compensation of $ 1.2 billion.

The Varelaleaks site discloses the alleged communications of Varela, in 2017 and 2018, with the solicitor Kenya Porcell ; Comptroller Federico Humbert, and former director of the National Security Council, Rolando López. Also with businessmen – like Pedro Heilbron, Stanley Motta, Taher Yaffar and Guillermo Liberman, among others; Panamanian lobbyist Jaime Lasso; the vice president of Venezuela, Delcy Rodríguez, and the former lady Lorena Castillo de Varela, among many others.

“This man [Martinelli] has intimidated the magistrates of the Court, has intimidated the leaders of the PRD, they have intimidated everyone who found information and who has not taken it out and in that way he wants to manipulate an entire country and be calm through all the streets of the country saying that he is a persecuted politician, with $ 84 million that a single company paid him, “said Varela, referring to the Spanish company FCC , which last week, according to a car from the National Court of Spain, He acknowledged having paid $ 84 million in bribes to lawyer Mauricio Cort, identified as Martinelli’s frontman. Cort is stopped.

Earlier, Varela had said, through a statement, that his cell phone had not been lost and that the leaking of his messages verifies what Panama already knows about the purchase, later illegal use lost the Pegasus telephone interception equipment, acquired during the management of former president Martinelli “.

In the interview with Telemetro Reporta , Varela was asked about the close relationship he had with the solicitor Kenia Porcell , as stated in the communications disclosed by Varelaleaks.

“The prosecutor faced a criminal organization that undoubtedly remains unpunished, led by the former president … An official feels lonely, because he fights against a structure that has the capacity not only to intervene a president’s phone but also to go to a [foreign] country, to mount in a cloud all the information [of a cell phone] … this costs millions of dollars, “Varela said.

“I had the responsibility of accompanying [the Attorney General], of coordination … That level of communication is mandated by the Constitution … There was a support, always respecting the independence of the Public Ministry,” and added that, as governor, He also supported the Public Force, “in the fight against these groups that believe they are unpunished.”

The former president said he will return to Panama next Tuesday and still does not know if he will proceed legally against those responsible for Varelaleaks.

“Today, judges and magistrates can be seen where Juan Carlos Varela is. Today all his communications can be intervened. It is a way to break the system,” he said.

Martinelli was already tried for alleged political espionage and peculated in the last two years of his term, but a court made up of three judges declared them “not guilty” in the first instance, on August 9. Against this decision, there are several appeals pending in the Supreme Court of Justice.
In the Martinelli government, spy equipment was acquired from Israeli companies MLM Protection (for $ 13.4 million) and NSO Group , provider of the Pegasus system (for $ 8 million), which were used by the National Security Council . The current whereabouts of the Pegasus team are unknown.

Federal judge Edwin Torres , who decided to extradite Martinelli from the United States to Panama to face the process for alleged espionage, warned that “there is sufficient circumstantial evidence to determine that there is probable cause that Martinelli embezzled the MLM and Pegasus teams “