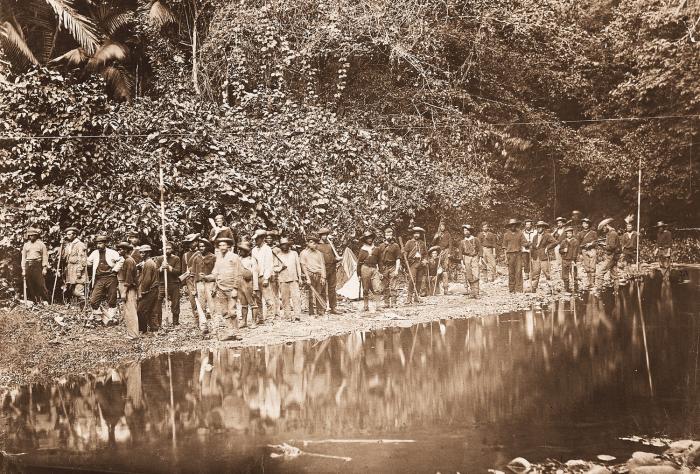 Since the discovery of the South Sea by Vasco Núñez de Balboa in 1513, the great powers of the world saw the need to make a passage between the two oceans that would facilitate trade and navigation in times of war. There were many expeditions and studies carried out since then in order to choose the best route between the seas, but, without a doubt, the idea of ​​building a canal through the Central American isthmus gained strength with the construction of the Suez Canal between 1859 and 1869 .

If the French had their channel in the Middle East, the Americans were determined to have theirs in Central America.

With the idea that success as a nation and its capacity for foreign commercial development depended on a channel that would allow it to more easily travel the path between the Pacific and the Atlantic, US President Ulysses Grant commissioned a series of expeditions through different areas of Central America: Tehuantepec, Mexico (Captain Robert W. Shufeldt); Nicaragua (Commander Chester Hatfield, Commander Edward P. Lull and Chief Civil Engineer Aniceto G. Menocal); Panama, along the railway line (Lull and Menocal) and Darién, by Commander Thomas Oliver Selfridge.

According to Dr. Alonso Roy, Selfridge made seven trips between 1870 and 1875, on the route of the Isthmus of Panama (www.alonso-roy.com), accompanied by a team of more than 200 expeditionaries, including photographers Timothy O `Sullivan and John Moran.

The first expedition, which Darien would cross, departed on December 3, 1870 with the Nipsic and Guard ships from New York, carrying a load of medicines against diseases, armaments to protect themselves from the natives on which the most fearsome preconceptions loomed, especially as for his physical strength and his hatred of foreigners.

Before entering the jungles of Darien, Commander Selfridge met with the president of the isthmus, Buenaventura Correoso, to fix the preliminaries. He offered his support and instructed Blas Arosemena to accompany the expedition and negotiate support among the mayors.

Despite the bad reputation of the Panamanian tropical climate, the Selfridge expedition found that Darién’s climate was, at least during the dry season, “one of the healthiest in the world.” Contrary to their expectations, the Darien Indians did not behave in a hostile manner, but docile and well-intentioned, although they did not like foreign intrusion too much.

The photographs captured by Timothy O Sullivan and John Moran, who replaced him on subsequent trips, show the beauty of the Darien jungle and its villages during the 19th century.