PORCELL OUT!! Here comes the fallout. 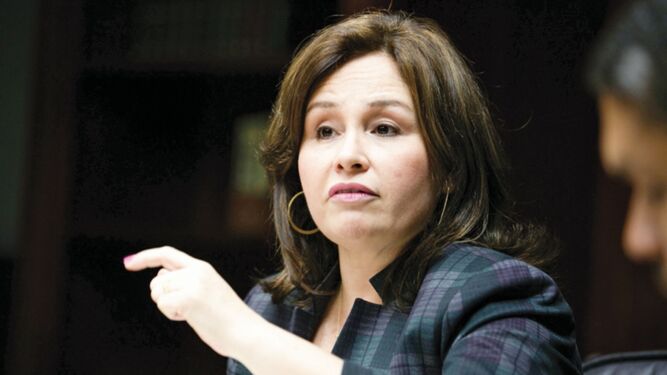 “I am not attached to the position, I have made the decision to submit the resignation, because I want an investigation to be done accordingly.”

Thus, during an interview with Radio Panama , the Attorney General of the Nation, Kenya Porcell, announced yesterday to the country that he will leave the post from January 1, 2020, after five years of leading large-scale anti-corruption investigations and after the publication of alleged conversations with former president Juan Carlos Varela in which they discuss legal proceedings, such as the Odebrecht case .

Prior to the announcement, the prosecutor took stock of his management in front of the Public Ministry (MP), in which he reiterated, once again, the call to the judges to be brave and give the prosecutors more time to investigate cases of high profile corruption.

He informed that today he will present his resignation to President Laurentino Cortizo , to include the appointment of his replacement in the extraordinary sessions that would be convened on November 18 in order to appoint three magistrates of the Supreme Court of Justice and six alternates.

After his announcement, the Palace of the Herons sent a statement, in which he informed that Porcell and the deputy secretary of the MP, David Diaz, were received in the Presidency and that he communicated his decision there and promised to “establish a smooth transition ” “We reiterate the commitment of the National Government to strengthen institutionality and the rule of law,” says the statement.

‘That they investigate everything they have to investigate’: Kenya Porcell

Kenya Porcell Díaz will leave the Office of the Attorney General five years before the expiration of the period for which she was appointed.

In the afternoon of yesterday he informed the country that he will leave the post on January 1 in the midst of the storm that generated the leak of WhatsApp chats through the “Varelaleaks” digital site.

On that platform you can read alleged conversations held by Porcell and then President Juan Carlos Varela, who appointed her in December 2014. The dialogues reflect the way the Executive would have influenced the Public Ministry, due to the proximity of the two figures : they shared the interiors of high-profile court cases such as Odebrecht, and Blue Apple , professed mutual admiration, and reveal that sometimes Varela would have even managed favors in other state institutions.

Kenya Porcell was appointed in December 2014 by Juan Carlos Varela for a period of 10 years. Archive
“The country is above the attorney and I have to think about Panama. My presence affects impartiality, ”said the attorney in an interview with Edwin Cabrera, director of Radio Panama , after saying that he would present this Wednesday the resignation of President Laurentino Cortizo. “That they investigate everything they have to investigate,” he added.

The solicitor’s announcement came almost at the end of the interview. The rest of the time he recounted his management, the obstacles he faced in carrying out investigations for crimes against public administration, and money laundering, among others. He said he had not read the content of what is disseminated in “Varelaleaks.” “I have not seen it, I have not read it and I will not do it, because that is a crime,” he said.

He also said that his communications have been altered. “Some things that my team has told me that they leave are not my expressions,” he said.

“I had some conversations with Varela, but from there to send in the Public Prosecutor’s Office, I reject that,” was the response he gave to detach himself from the Executive.

One of the leaked chats contains conversations between the former president and his brother, former deputy José Luis Popi Varela, in which they refer to the agreement with Odebrecht, and the role played by Popi Varela and André Rabello, former mayor of the construction company in Panama to finalize the pact. In May 2017, Rabello was pushing to reach an agreement. The communications between Popi Varela, his brother, the then president of the Republic, and Rabello, would reveal manipulation and pressures so that the latter was favored, while seeking to reduce the impact of the fine imposed by the Public Ministry on Odebrecht. When the attorney was asked about the issue, she replied: “We do not control what outsiders of the institution speak or say.”

He warned that the Odebrecht case will remain unfinished if the Judicial Branch does not extend the period requested by the Special Anti-Corruption Prosecutor to continue gathering evidence.

He also expressed that he had received calls from prosecutors from other countries interested in assisting in the investigation “to determine the origin of this information.”

At the moment, there is no ongoing investigation for filtration. Last week in a television interview, former president Varela said his cell phone was never lost, and that his communications were extracted without his consent. He blamed former President Ricardo Martinelli for being behind the leak, using the Pegasus spy system. Article 112 of the Criminal Procedure Code establishes that the investigation of crimes against the inviolability of secrecy requires the submission of a complaint from the offended party.

The leak was made public on November 5, days after a media outlet in Spain published that the Spanish National Court charged FCC Construcción for the payment of 82 million euros ($ 91 million at the current exchange) in commissions in exchange for the award of public works contracts in Panama. One of those mentioned in that plot is Martinelli.

The resignation of the head of the Public Ministry generated multiple reactions between the different sectors of society. “Rule of Law is one of the pillars of the #GoodGovernment. Guaranteeing a transparent and independent justice system and restoring confidence to Panamanians is our duty to the State, ”President Cortizo wrote in his Twitter account.

Ebrahim Asvat, lawyer and political analyst, and who has been a hard critic of Porcell’s work, tweeted: “The important thing about the Attorney General’s resignation is that it does not generate a wave of impunity. Whoever is chosen should act more firmly. ”

In the Public Ministry, Kenya Porcell has faced five difficult years. He mainly investigated dozens of cases on corruption, and money laundering, in which he arrested former ministers, and businessmen, among others. Several times he directly questioned the Judicial Branch and the political and economic powers of the country for impeding processes. He will now join the club of attorneys who have not managed to complete their period.

Since democracy returned to the country, only José Antonio Sosa , appointed by Ernesto Pérez Balladares, completed the 10 years.

Together with Porcell, the secretary general of the Attorney General’s Office, Rolando Rodríguez, will leave; and the undersecretary, David Díaz.

JB here.
So no wonder I have had people reach out to me to disseminate information in the press.
I copied and pasted this article direct from LaPrensa.
One of the flagship papers of the nation.

The whole fuckin article they refer to Porcell as “he”.
And people wonder why my opinions about the inside nature of government here is silly.

Mentioned this aspect to my Bocas friends involved in that well publicized land issue.

Go ahead and try to be a “gringo” and sue Panama.
Keep throwing away your money. Keep investing to change things and hoping you see progress. It’s a fools bounty. The system is robbing you Ex-Pats blind. Just throwing good money on top of bad.

Seriously, the fucking Attorney General is allegedly crooked, and it’s how Cortizo’s turn to feast on all the corrupt and replace with people who will face the same charges 5 years from now.

Keep your money in your pockets people.