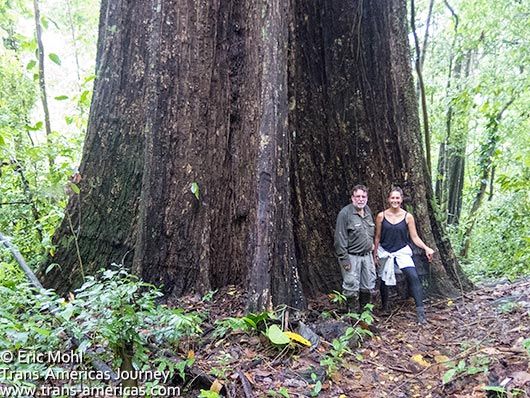 GREEN GIANTS could be a boon for ECO-TOURISM.

In the deep Darien are what are arguably the oldest and largest trees in the country, “green giants” embedded in the jungle, which have begun to be studied by a team of scientists from the Smithsonian Tropical Research Institute (Stri) .

After a trilogy of routes in 2019, the scientific mission, always in the company of members of the Emberá communities of the Balsa River and the National Border Service, managed to identify 66 trees of great proportions and the most tall was 78 meters high, “the tallest tree in the country ”, says Dr. Catherine Potvin, member of the expedition. Moreover, when in Panama it is considered “that the forest does not grow more than 50-55 meters high.”

And if the height of these titans is impressive, their longevity is more impressive: “Using median growth rates of the trees on the island of Barro Colorado, it is estimated that the age of these trees should be between 250 and 600 years.” In other words, they were trees of respectable size when Christopher Columbus’s men arrived in Panama, Potvin illustrates.

Approaching and standing in front of them (mountain almond, espavé and bongo, mostly) to enjoy its magnitude and leafiness is “fabulous”, he describes. It’s a treasure”.

There is more. The estimated carbon capacity stored by these wooden colossi exceeded 2,500 tons per hectare, leaving behind the 130 tons reported in previous studies. “And this is not a mistake, nor a dream of scientists. It is that the mission found gigantic trees ”, justifies Potvin in the article Forest of giants that he recently published on the Stri website ( stri.si.edu ).

The scientists established 20 monitoring plots in the Darien unintervened forest, from the Manene community, moving 25 km down the river, to about 6 km from the border with Colombia. “It will take another year to finish the analysis of all the results, but scientists can now confirm how magnificent the Darien forests are.”

The pioneering research had its origin in 2014, when the Stri brought to Panama a light aircraft with technology to take photographs of the forest in three dimensions and thus measure their sizes and estimate the carbon they stored.

The experience led to a team of scientists deciding to establish an Ancient Forest Observatory in Darien. And after finding and being surprised, in the first expedition of 2019, with a giant bongo that gave way and fell in the middle of a river, a member of the team, Dr. Matthias Kunz, made an essential contribution to locate the other Darien giants: He used satellite imagery to try to identify the crowns of the largest trees, and after a thorough analysis, 200 landmarks were located. The last scientific tour managed to reach up to 66 trees thanks to the study of those images.

It remains to establish later in the year the Observatory of Ancient Forests, if the SARS-CoV-2 allows it, Potvin warns, to expand the investigations and “learn more about the life of these trees that have been in Darien probably before Spaniards will arrive in the land that is now our country. “