Panama Metro receives bids,….let’s see if all 3 are refused for ODEBRECHT. 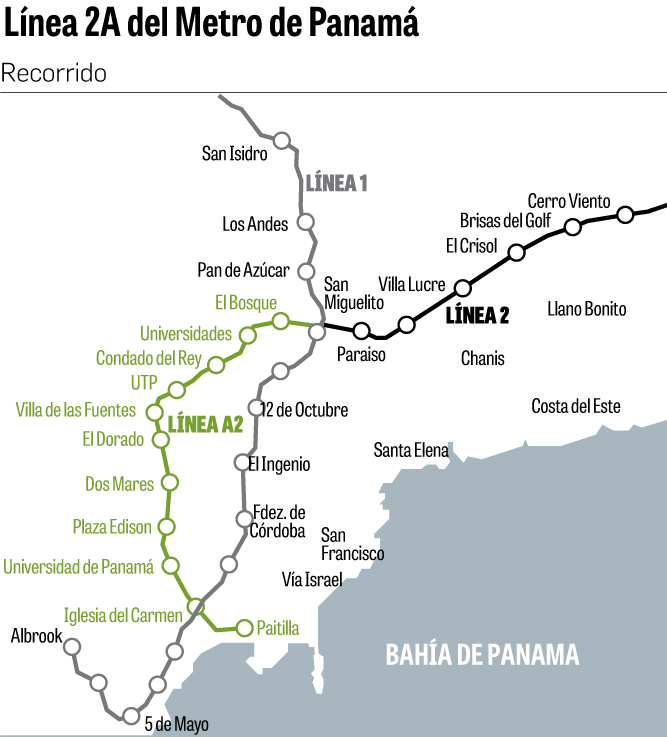 hree offers received the Panama Metro for the contract for the development of the diagnosis and urban analysis of the extension of line 2 from the San Miguelito sector to the Paitilla area.

The results of the feasibility study will serve as the basis for preparing the tender specifications for the design and construction of civil works, and the contracting of rolling stock.

Line 2A, as the project has been called, would begin in San Miguelito, it would extend along Ricardo J. Alfaro Avenue (Dead Tomb), continue along Manuel Espinosa Batista Avenue, pass through Federico Boyd and Aquilino De La Guardia avenues, and will end in the Paitilla sector.

Within the initial concept, a transfer with line 1 is contemplated at the station of the Church of Carmen.

The companies participating in the tender are: Proyeco-UTL Consortium , composed of Project, Execution and Controls of Works and Urban Travel Logistisc, which offered 190 thousand dollars; the Accidental Association consortium formed by City Plan and Suma, which proposed $ 150,592 and Steer Davies & Gleave Limited , which presented the highest amount with $ 236,450.

The Metro had established a reference price of 200 thousand dollars.

The length of the route would vary between 9.5 kilometers and 9.8 kilometers, since it will depend on whether the connection to the Carmen church station is ruled out, but what is defined is that the project will have 12 stations.

These studies that seek to hire the Metro are part of the preliminary actions in the long-term planning of all the lines that are planned to be built and does not imply that the execution of the 2A route has already begun.

With route 2A, the financial, hotel and hospital sectors are connected with the east sector of the city, as well as with the Tocumen International Airport.