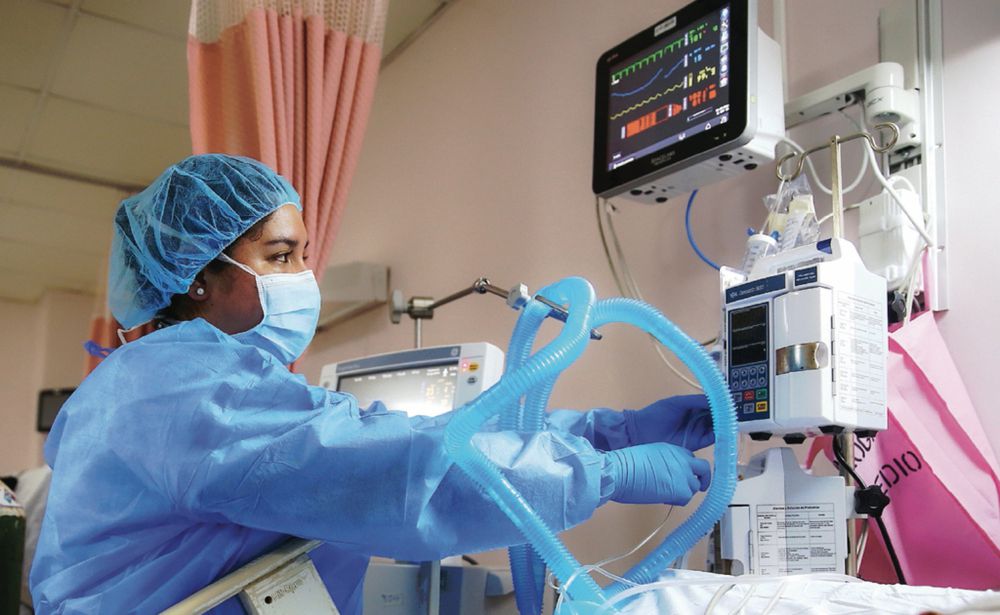 Julio Sandoval, advisor to the Ministry of Health (Minsa) on the subject of ICUs, assured that mortality went from 50% in the initial stage of the pandemic, to 30%, with support measures and non-invasive methods, by avoiding intubation to the patients.

International data indicate that mortality in ICUs is approximately 65%.

The intensivist and president of the Panamanian Association of Intensive Care Physicians said that 50% of the cases that occur may be asymptomatic and the other 50% will present symptoms. He also specified that 85% of the people who become infected will suffer from the disease like a common flu and will be able to recover in 10 or 14 days without problems, and that 15% will require hospitalization.

This was indicated by Julio Sandoval, advisor to the Ministry of Health (Minsa) on the subject of ICUs throughout the country. The specialist explained that this percentage has been achieved because they have developed a phytopathogenic scheme for the new SARS-CoV-2 coronavirus and multiple therapeutic strategies.

He added that the clinical scenario of the patients is that 50% may be asymptomatic and the other 50% may suffer from the disease, but, within that group, 85% have a picture of recovery without problem and 15% are the one who It requires going to a hospital ward or entering an ICU.

During a scientific activity organized by the Sangre Panama foundation , Sandoval explained that they have identified and documented the three stages of this disease.

He explained that the first stage is that of viral replication, in which there is an early infection and the patient has some alteration of smell and taste, fever, dry cough and headache.

“This first phase of viral replication is where several studies have been tried with drugs that are not antiviral, but try to modulate the body’s response, but, the truth, none has been overwhelmingly successful,” he stressed.

Then comes stage two or pulmonary phase, which is when the patient has shortness of breath, low oxygen levels, and x-ray, ultrasound or chest tomography that shows the lungs are compromised.

The third stage is hyperinflammatory, which occurs when the patient is seriously ill, in intensive care, under mechanical ventilation.

Sandoval explained that the therapeutic strategies, the measures that are used with these patients are really “heroic”, that the cascade and the systemic inflammatory syndrome have the patient against the wall.

Emilio Saturno, allergist and immunologist for children and adults, and one of the first patients when the pandemic began, says they were difficult days.

About 18 days hospitalized, eternal nights with intermittent sleep, and the anguish of not being able to breathe are the memories of Saturn, who says that he does not wish that situation on anyone.

He said that the first symptoms appeared on Wednesday, March 14, seven days after a trip he made to the United States for work. It was a fever and a sore throat, and he thought it was a common cold with an allergy, but, on the second day, his scenario changed: fever appeared, chills and coughing began. Already on the third day he had difficulty breathing, due to the persistent cough.

After checking his oxygenation, he realized that he was going down, but when he took a deep breath, he recovered. It was at that moment that he said “this is what appears to be” Covid-19, but decided to wait one more day to call the Ministry of Health and request the test. By the time he woke up, his oxygenation had dropped to such a point that he couldn’t recover.

He added that none of the medications that he self-medicated, thinking they might help him, worked for him, and he was hospitalized on Saturday.

The doctor relates that his colleagues, on a daily basis, evaluated what treatments they would give him, since at that time it was a pathology about which not much was known. “And I couldn’t tolerate being without oxygen at first,” he said.

Both doctors, both Saturno and Sandoval, agree that this pandemic is not over yet, so they ask the population not to lower their guard and maintain a physical distance of two meters, use of a mask, wash hands and not touch their face, since they are the most effective measures to avoid contagion.

They emphasize that there is no effective anti- Covid-19 treatment , that there are only support measures for patients.

Data from the epidemiological reports of the Minsa until September 14 show that 102,204 cases of Covid-19 have been registered in the country, of which 2,173 correspond to deaths.