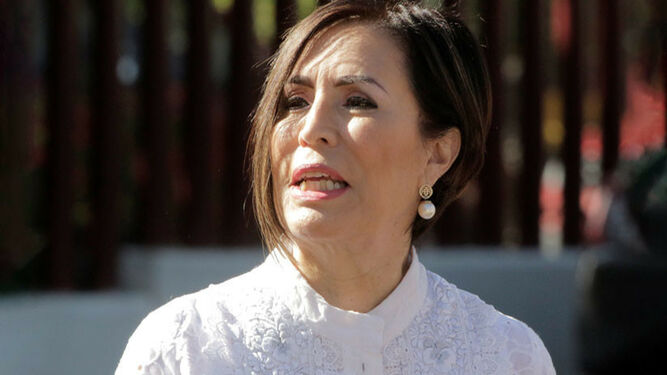 Rosario Robles , former State Minister in the government of former President Enrique Peña Nieto (2012-2018) was arrested on Tuesday, August 13 and will remain in prison in a prison in Mexico City, accused of corruption for the diversion of more than 300 million dollars of public resources.

The former Minister of Social Development and Agrarian Development offices during the Peña Nieto administration was arrested at the end of a 12-hour hearing before a judge, who ordered his preventive detention.
“Unfortunately, the judge gave him a preventive detention for two months, it is the time we have to provide new evidence to the investigation,” said Xavier Olea, Robles defense, in statements to the press.
The defense of the former official said that it is a political persecution against her client and that she has all the necessary resources to prove the innocence of the former minister.
“I think justice has failed us,” said the lawyer, who confirmed that Robles was already transferred to the Santa Martha Acatitla prison, east of the Mexican capital. The diversion of some 300 million dollars known as La Estafa Maestra was revealed through an award-winning journalistic investigation published in September 2017, and was another blow to the Peña Nieto administration, already stained by major corruption scandals.
According to investigations by the prosecution and the Superior Audit of the Federation, the corruption scheme would involve more than a dozen federal agencies, including the two ministries where Robles served, through the simulation of contracts with educational institutions.
The Mexican Public Prosecutor’s Office affirmed that Robles knew that both officials in his charge committed irregularities in the direct hiring of public entities, but that he did nothing to avoid it nor did he inform the former president Peña Nieto.
Asked about the arrest of Robles, the leftist president Andrés Manuel López Obrador said that “it is an issue that is being addressed by the Attorney General’s Office, the Public Ministry and the judge”, who will decide whether to declare “formally imprisoned Rosario Robles.”